As many of you know, I have been extensively researching the crash of a Capital Airlines DC-3 that occurred on June 22, 1957 in Clarksburg, Maryland. Besides that actual incident, I've delved into the lives of the three crew members: Henry Podgurski & Robert Thomas, the two first officers seeking to upgrade to Captain and Carl Burke, the instructor pilot. Thomas' family sent me this picture of Thomas feeding a deer outside of Capital Airlines ship 214-C (not the plane involved in the accident). Pardon the extremely poor quality of the image: 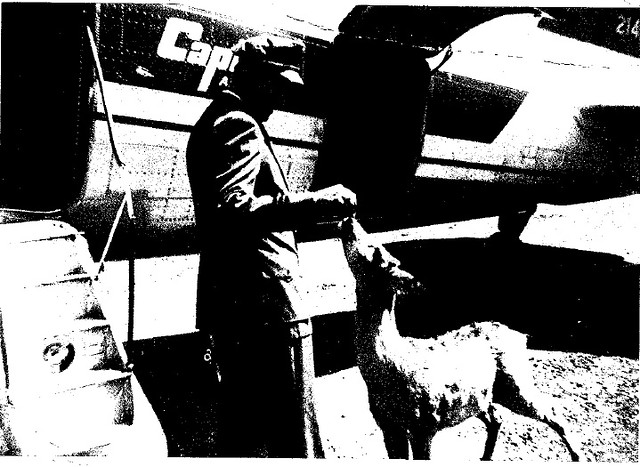 On a whim, I decided to see if I could find out the history of ship 214-C. Ship 214-C, N21781 was named "Capitaliner Detroit" and was the second DC-3 delivered to Penn Central Airways, which was Capital's original name, in November 1939. During World War II it was one of the DC-3s that the Government allowed the airline to retain. After PCA's first DC-3 delivered crashed in Birmingham, Alabama in January 1946, it became the longest serving aircraft in PCA/Capital's fleet, and it survived all the way to Capital's demise with the United merger in 1961 -- just under 22 years of service.

The DC-3 changed hands a number of times after United sold it shortly after the merger. Astoundingly, the plane is still extant and airworthy as N26MA based out of Lake Elsinore, California, and apparently it spends some time in Hemet as well. I passed this information back to Thomas' family, and his brother contacted the owner of the plane. The owner invited the Thomases to come on out and see the plane and could go inside. It must be nice for the family to have something tangible to link to their loved one, that here was a plane Robert Thomas actually flew.

As significant as this airframe is, I hope that when the current owner decides to part with it, whenever that may be, that the plane will be preserved and/or restored to its Capital or PCA livery.
SaxMan

As it turns out, N26MA is the "go to" DC-3 whenever a Hollywood producer needs one. It has been featured in an episode of MacGyver. It has also been in the movies Pearl Harbor, Mulholland Falls, Quantum of Solace, Con Air, and the music video for "Breathless" by The Corrs:

This has actually been an interesting and fun exercise tracing the various histories, especially when you find survivors. I found two other ex-Capital DC-3 survivors: N220MA with Tom Bolack in New Mexico, and the CAF's "D-Day Doll" was a C-53 that was an ex-Capital Airlines bird.

Capital, in general operated about 24 DC-3s at any given time, although the total number of different planes that passed through their hands is probably closer to 40.

Of their Constellations, there is only a single survivor -- the one that is currently on display in the TAM Air Museum in Sao Carlos, Brazil. It is reported that two of their fleet of 60 Viscounts are still extant...both in parks as static displays in South America, although other sources indicate that none of the Capital Viscounts survive. The one at MAAM was ordered by Capital, but was foreclosed on by Vickers before it could be delivered to Capital.
SaxMan

A rather bizarre twist to one of the Capital DC-3s...

Capital lost a DC-3 (DC-47) N88835 in a training crash in Clarksburg, Maryland on June 22nd, 1957 (I've done extensive research on this incident) N88835 was re-registered to the same plane, Douglas DC-3 c/n 19448 on October 22, 1957 -- four months AFTER the accident, and long after the Capital Airline mechanics hauled the wreckage away...there was nothing salvageable from it. It was registered to a Sophia Smith of Miami Beach, Florida. The actual address is a small bungalow that is still extant.

There is no record of a Sophia Smith in Miami Beach in the late 1950s that I can find. I'm wondering if there was some kind of subterfuge going on...someone using the registration from a crashed plane to cover their tracks over another airframe. Given that Miami Airport was the "hub" for all kinds of stuff going in and out of the Carribean and Latin America, both legal and illegal, I'd suppose anything was possible from a CIA operation in Central America, to Castro sympathizers, to some kind of illicit operation. Anyone want to venture a guess on this? Perhaps someone acquired the data plate to register another DC-3 that had questionable ownership?
Warren1925

Can anyone help me get in touch with family of Carl Burke? My father flew for Capital and they were close friends. I want to return something to the family.
Thanks
Post a reply
Switch to full style