I finished my most recent project about a month ago, at least got it flying, there are still things to do. This one is for me, not a customer, it's a Travel Air E-4000 that rolled out of the factory in Wichita on December 28, 1928

Through the magic of the internet I was able to track down the grandson of the original owner, and he sent me several photos of his grandfather, J. L. Parker of Kansas City, with the airplane back in the day. It was actually built as a Model 3000 with a water cooled Hispano-Suiza V-8 engine of 180 hp, but Parker took it back to the factory less than a year after buying it and had them convert it to a Model E-4000 with a Wright J-6-5 radial of 165 hp.

Here, from the FAA records, is a scan of the original Bill of Sale, signed by both Walter Beech and Olive Mellor. Olive later married Walter and went on to become CEO of Beechcraft in later years.
$4,140.00!

And a friend with a subscription to newspapers.com found this, an ad from 1930 for an airshow that lists Parker as one of the Famous Bird-Men attending:

Here are a couple of GoPro shots

The airplane was restored in upstate New York in the late 1970s and flown extensively, visiting Sun 'N' Fun, Oshkosh, and other fly-ins. That owner died in 1999, and his son inherited it. I bought it from the son. The last annual in the logbooks was in 1995, but the fabric and structure were in great shape. The engine (a 220 Continental, installed when it was a crop duster in the 1950s), however, had last been overhauled in 1954, so with the help of some friends I disassembled the airplane and brought it back to Virginia in a Ryder truck. Besides needing a fresh engine, it needed a lot of other work, new hoses, tires, cables, wiring, and etc. It took about 10 months to get it flying again, but it flies very well. I'm going to use it to start a biplane rides business at Culpeper, and also hope to take it to Oshkosh this summer, so keep an eye out.

Miss Marianna was what J. L. Parker named it, so I had to put that back on

I've also been in touch with the family of the man who owned it from 1935 until 1939, Harold Tschantz of Columbia City, Indiana. They are going to see if they have any photos of it, and my friend found an article about him saying that he was part of Air Mail Week in 1938, when local pilots were inducted as Air Mail pilots for one day as a promotional event, and flew the mail from their local airports to the nearest big city hub. So it appears that this was an actual Air Mail airplane, if only for a day-

Thanks for posting that.
Looks great! I'm sure she's a lot of fun to fly.

Beautiful airplane and great history!
If I still lived in Virginia I'd come take a ride.
Dan K

Here´s hoping your Travel Air is as fun a time machine as she appears to be!
Dave Hadfield

Pemberton and Sons Aviation here in Spokane are restoring a Travel Air from just a frame.
It should be flying later this year...perhaps by the end of summer.
Baldeagle

Miss Marianna and I had a nice 17 day trip from Virginia to Wisconsin and back in July, including of course Oshkosh. We flew on 15 of those 17 days, and gave over 90 people biplane rides during that time. Here are a few photos from the journey-

First, a Nigel Hitchman photo over Brodhead, Wisconsin, during the Pietenpol fly-in on the weekend before Oshkosh 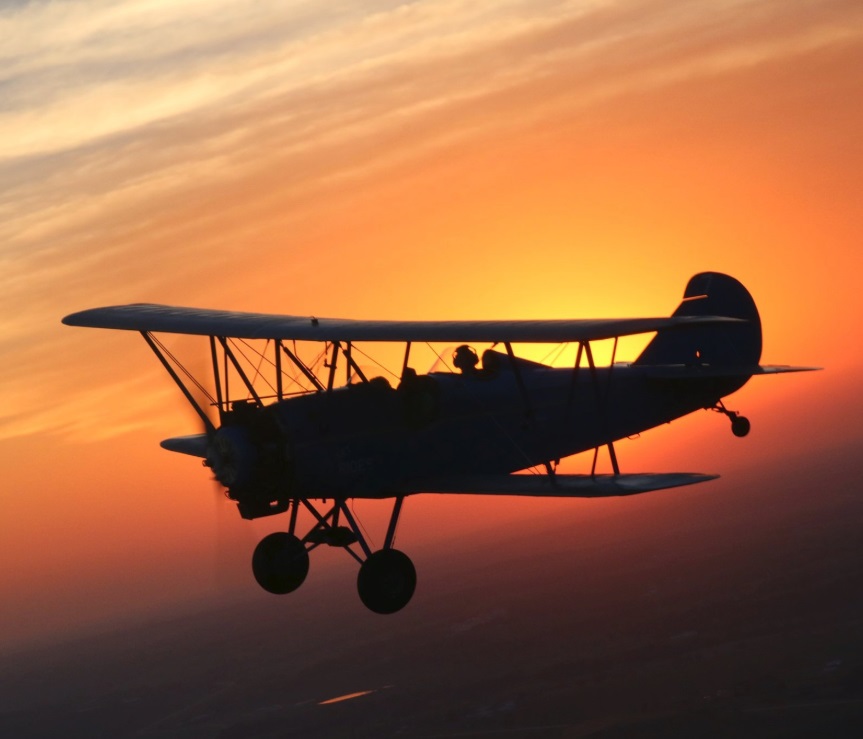 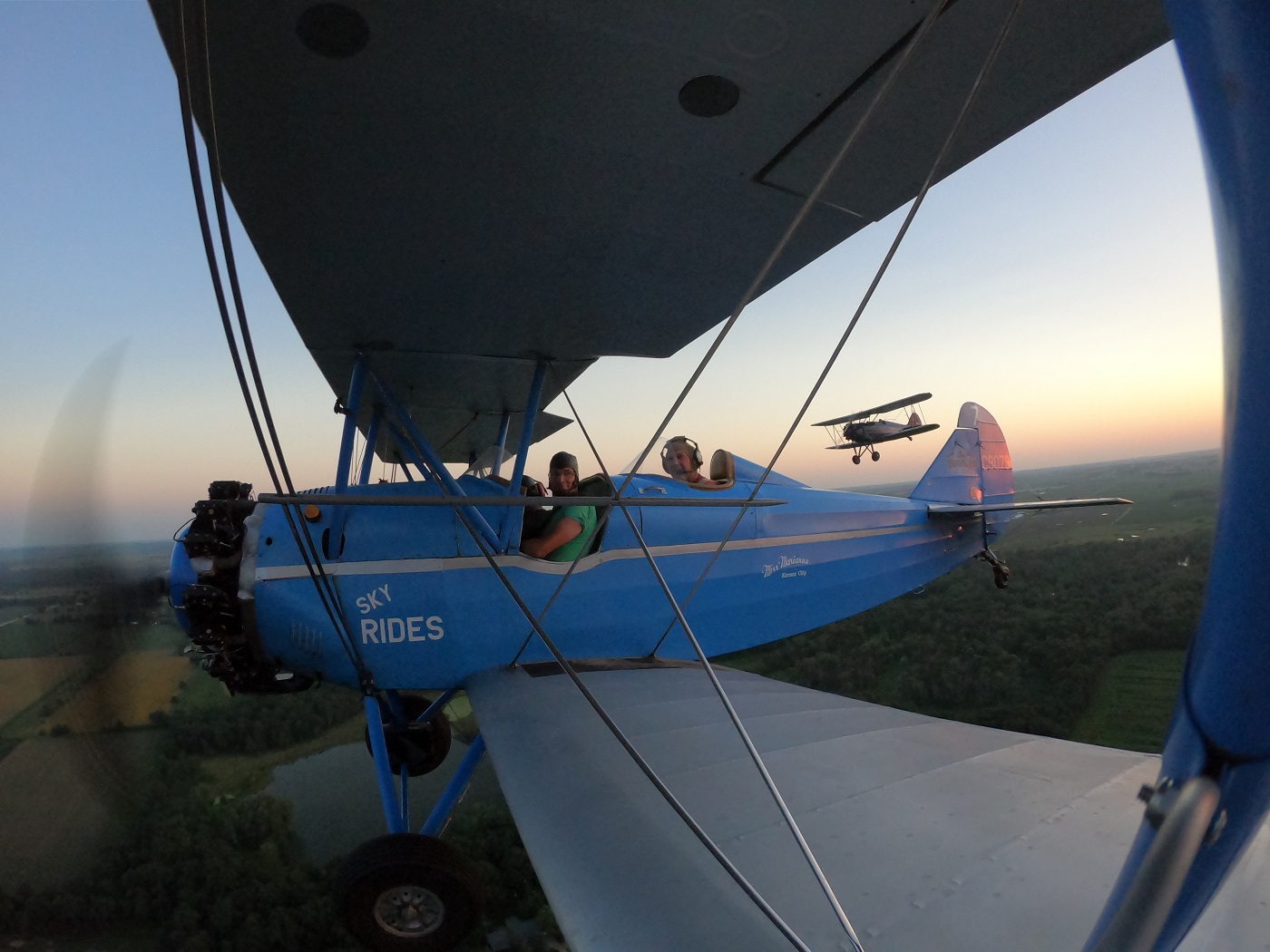 When we left Oshkosh we decided to fly the lakefront route past Chicago. I was accompanied by Dewey Davenport in his 1930 New Standard D-25 and Joe Santana in his 1950 Super Cub. 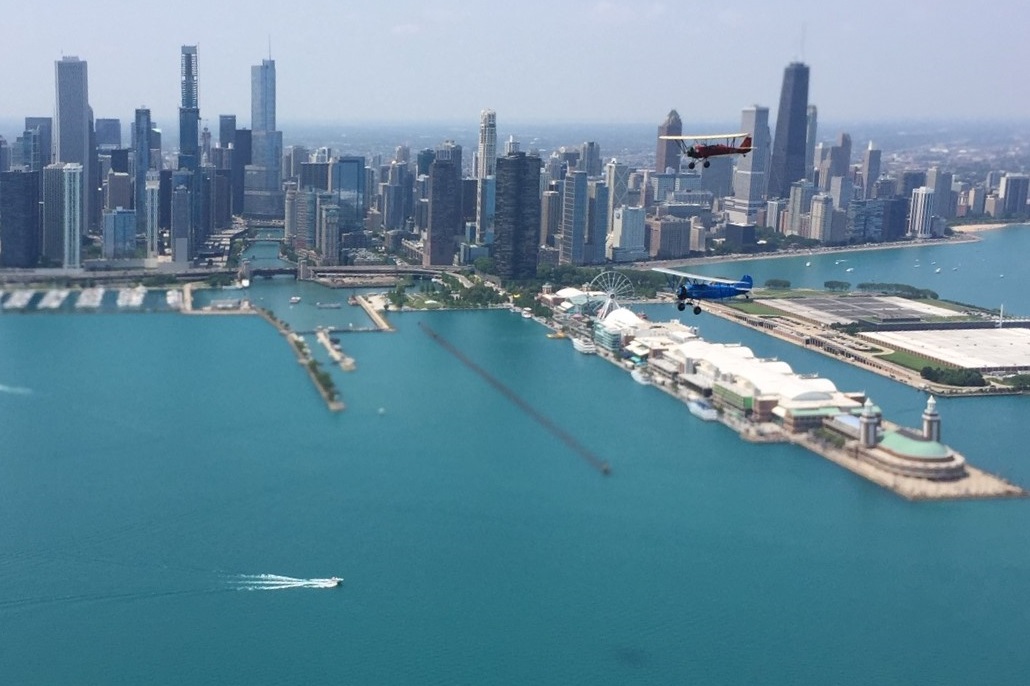 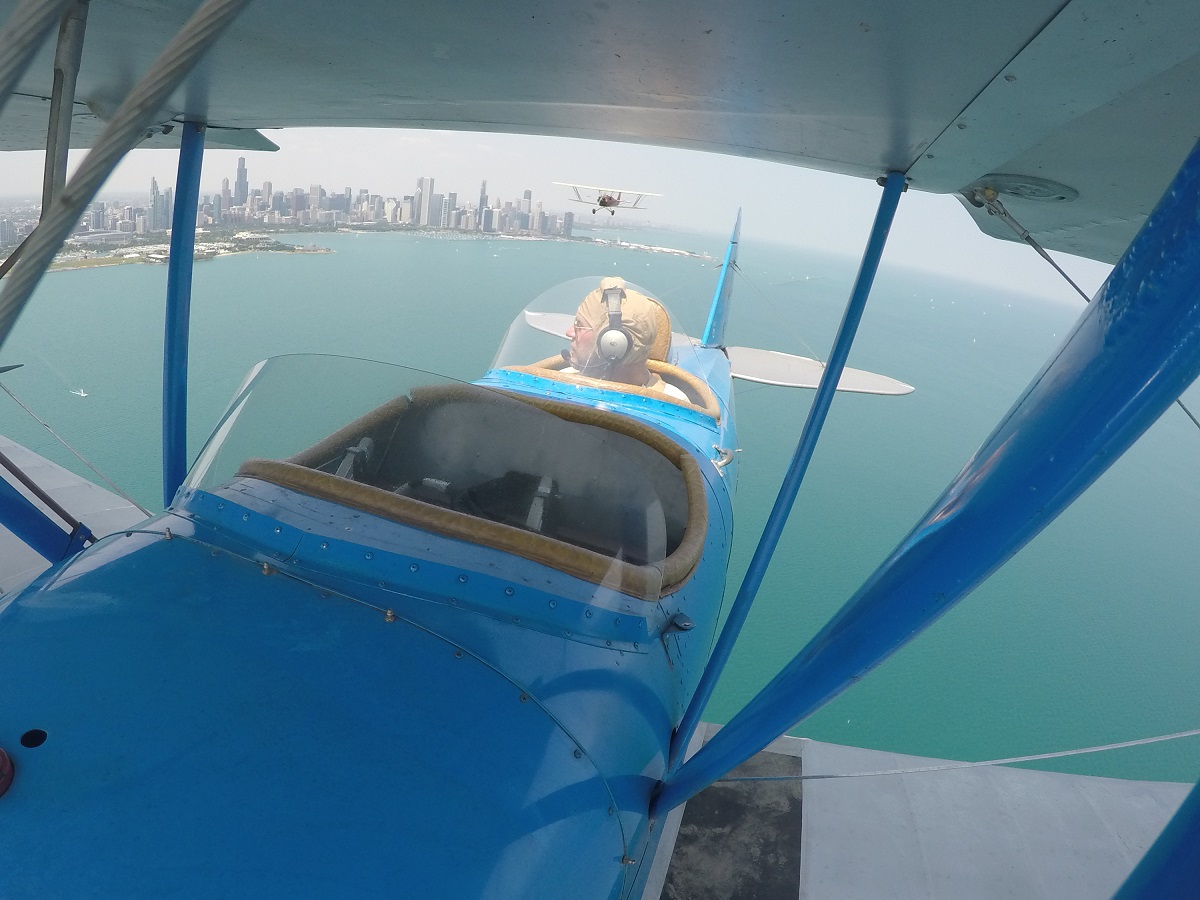 On the way home I stopped in Columbia City, Indiana, to meet the Tschantz family. Harold Tschantz owned the airplane from 1935 until 1939, and his daughter-in-law, grandkids, and great-grandkids came out to meet me and go for rides. Here we all are in front of the airplane- 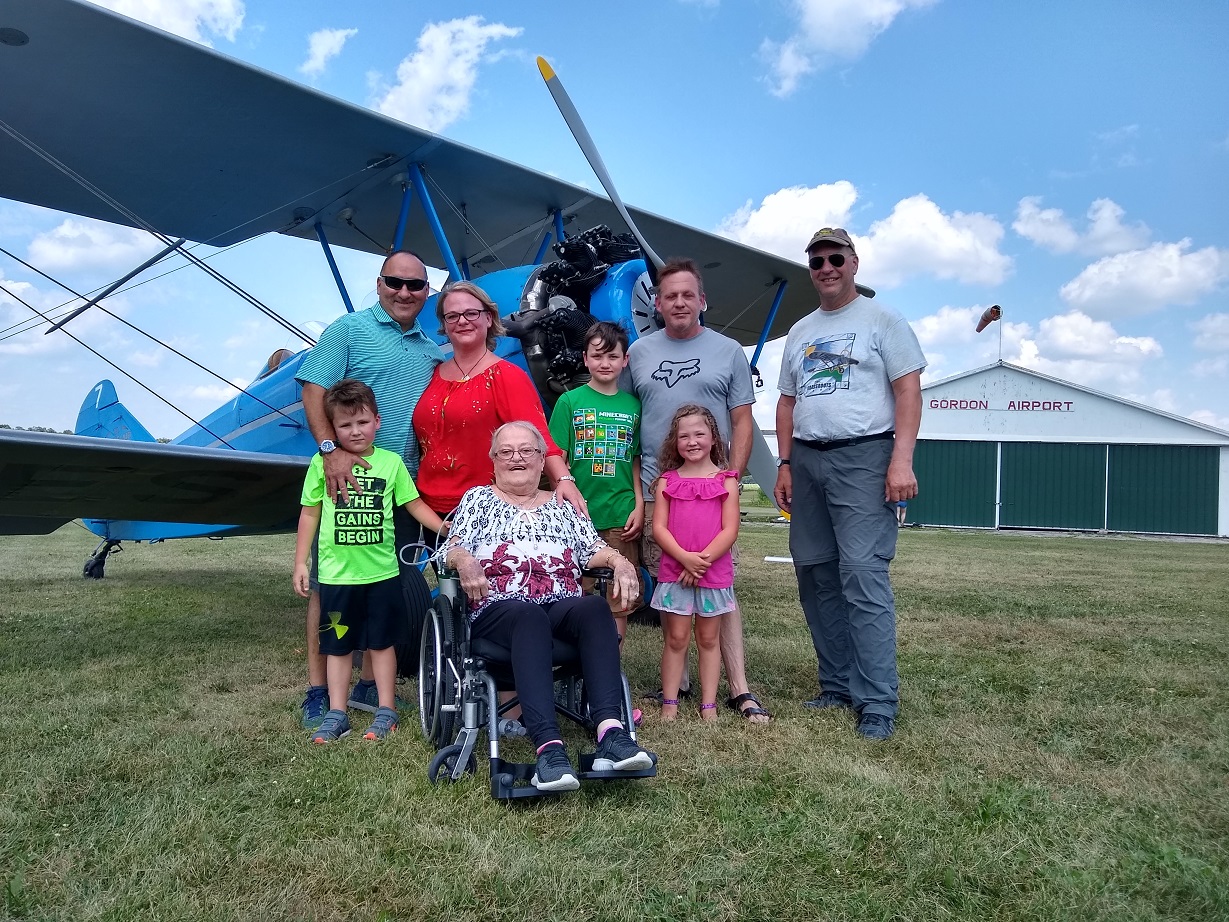 The old Tschantz farm, where Harold had a runway and kept the Travel Air in the 1930s, was only a few miles from the private strip where we met, and before I left we pulled up a satellite view on an iPad, and they showed me what roads to follow and landmarks, and while I couldn't land there as it was in beans, I did buzz it a couple of times and put the shadow back on it for old time's sake

Field center in this photo 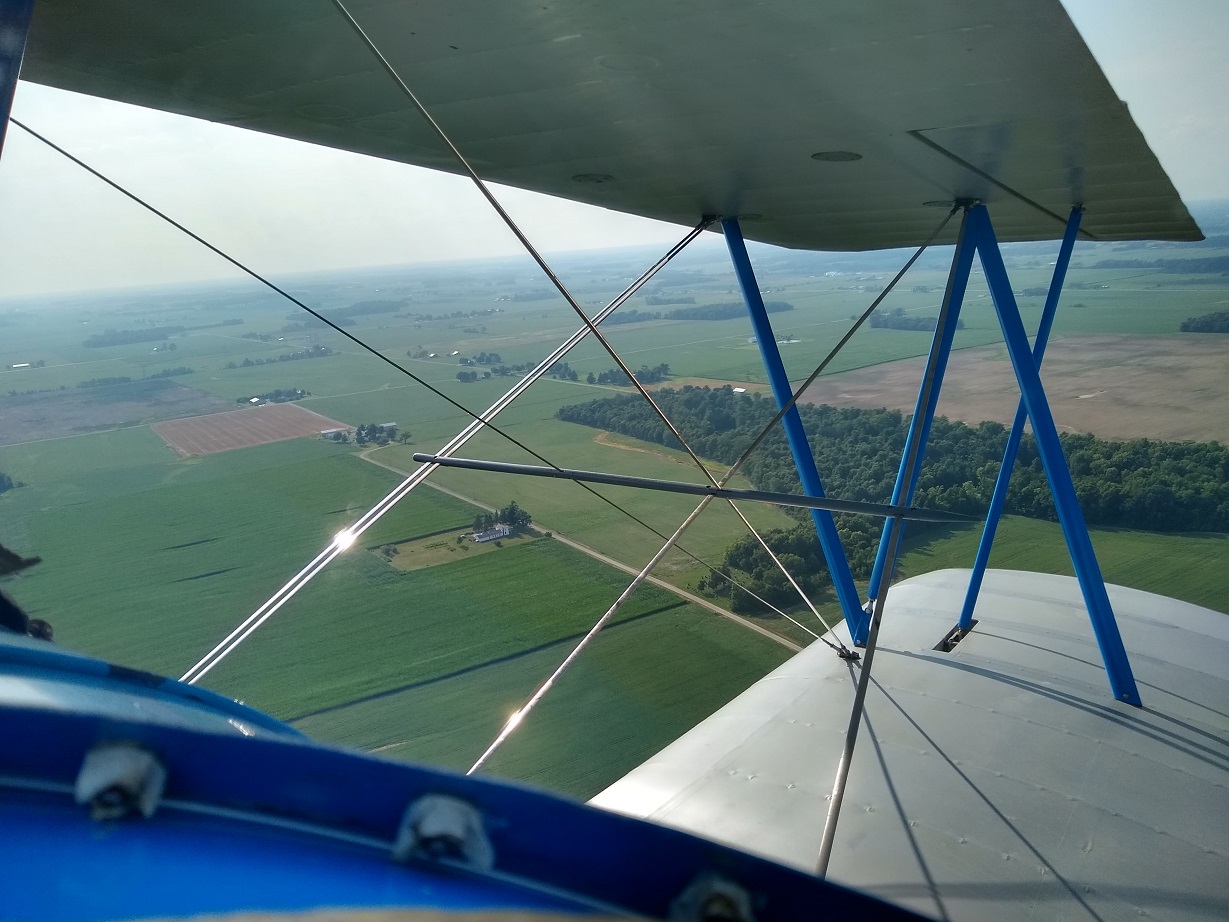 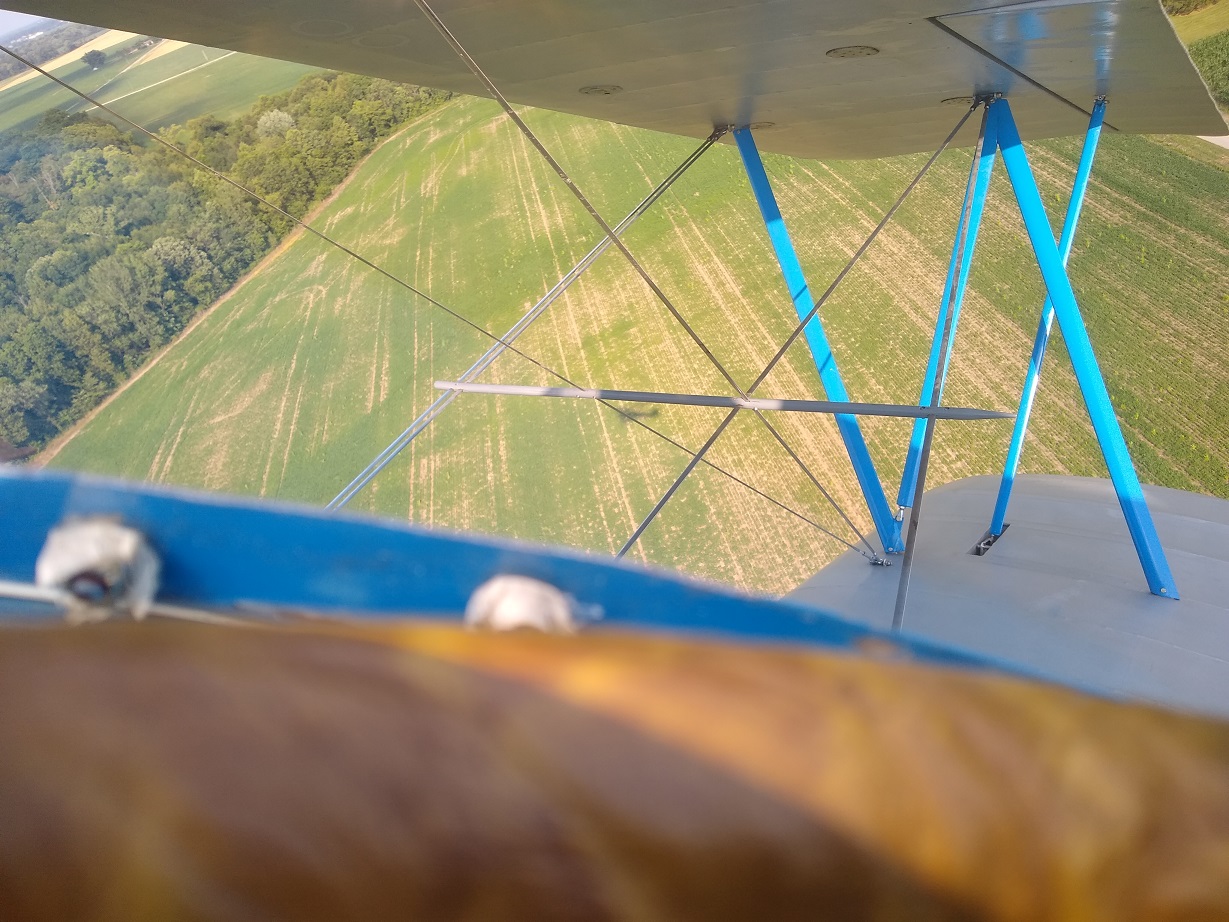 Harold with the airplane in 1938 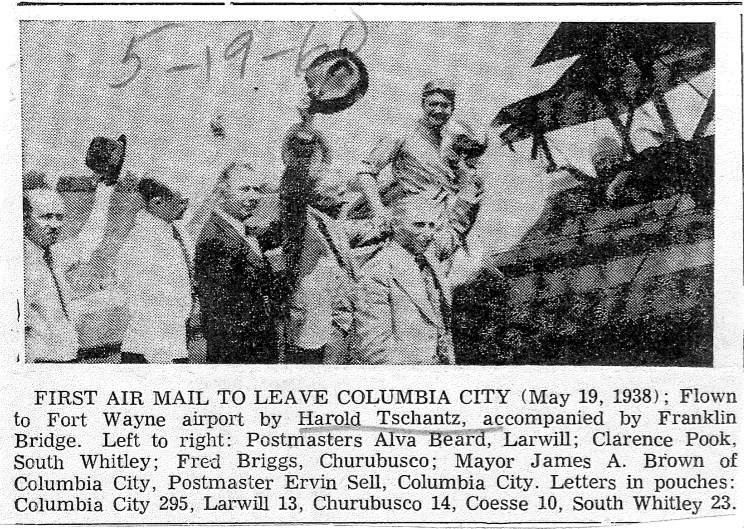