Coast to coast in a Bucker Jungmann

Coast to coast in a Bucker Jungmann

Well, not quite coast to coast, but from the Santa Paula, California, where I could see the Pacific, to Cheraw, South Carolina, where I could not see the Atlantic, but not too far away. I haven't added up the exact numbers yet, but it was about 2,480 miles and I averaged about 100 mph. The aircraft was being delivered to a new owner. If everything worked perfectly it could have been done in four days, but because of weather and a dead battery it ended up taking seven days.

Just west of Santa Paula, looking out at the Pacific 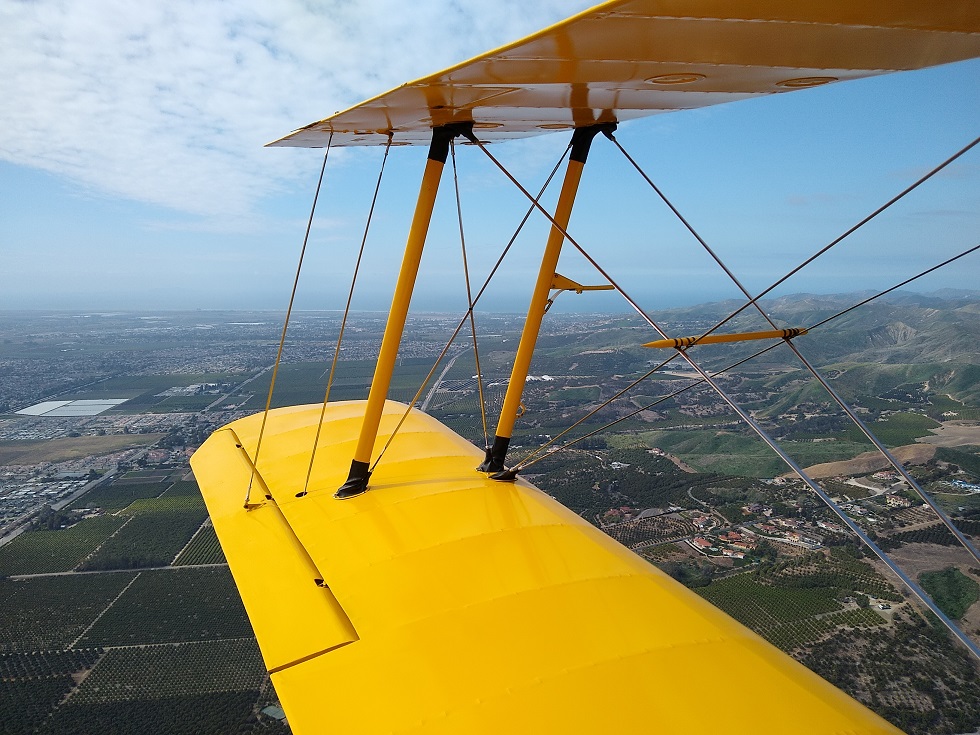 We Easterners don't think about cold and snow in California, but here is a view of the north side of Big Bear, on the leg between Apple Valley and Twentynine Palms, showing the snow, and it was friggin' cold. 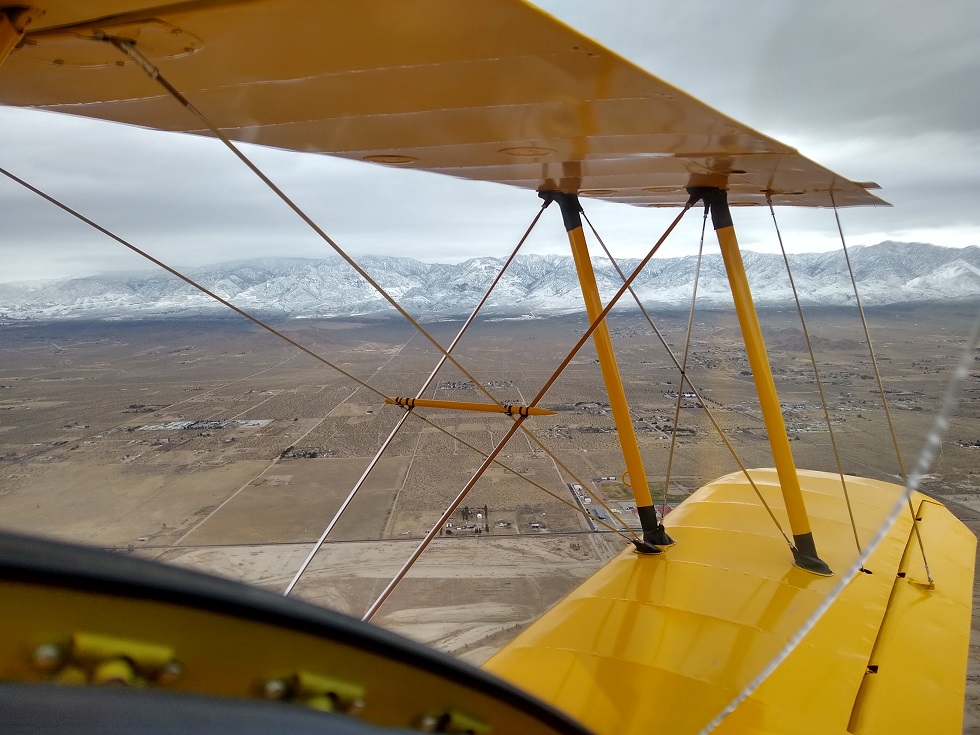 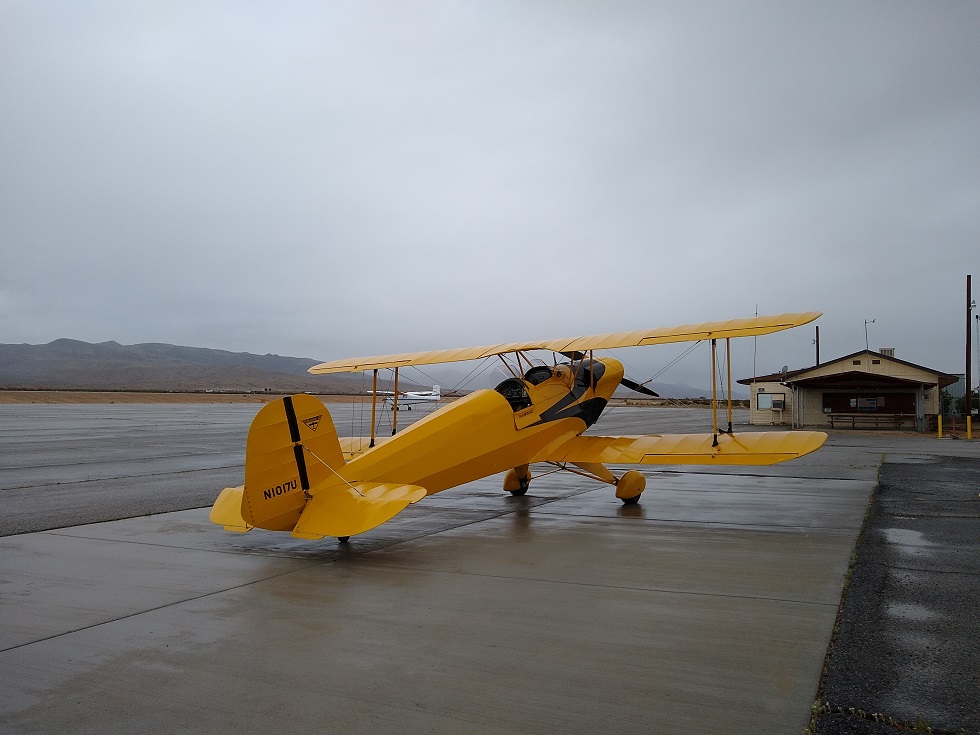 Blythe, California, winds 350 at 22 knots, fortunately right down the runway. 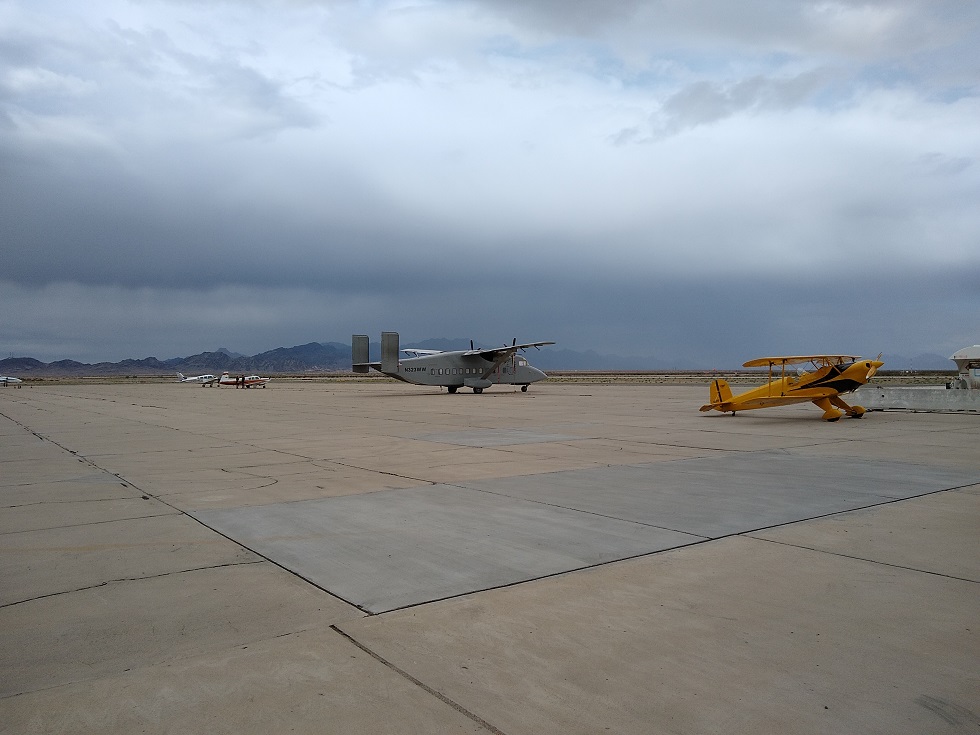 Some scenery between Blythe, California, and Buckeye, Arizona 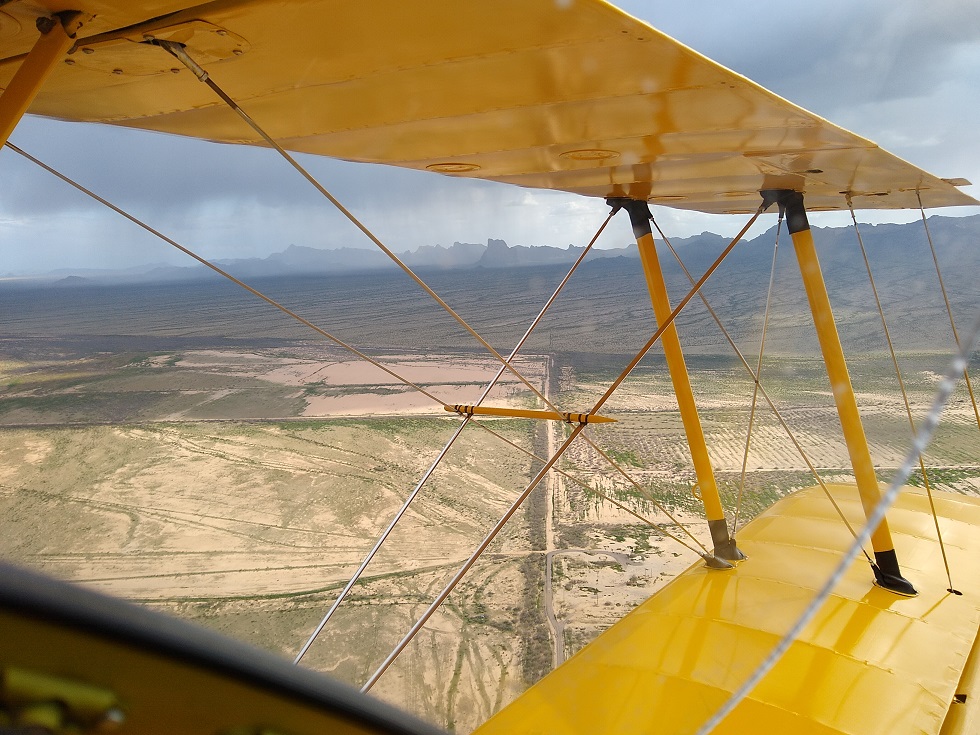 Made it to Casa Grande, Arizona the first day, and the second day dawned clear and beautiful. Unfortunately 100 miles down the road it was raining, and rained all day, so spent another night in Casa Grande. I did get a look in the Gosshawk hangar, which was pretty cool.

Finally on Wednesday I got going again, strafing some Saguaro on the way to Benson 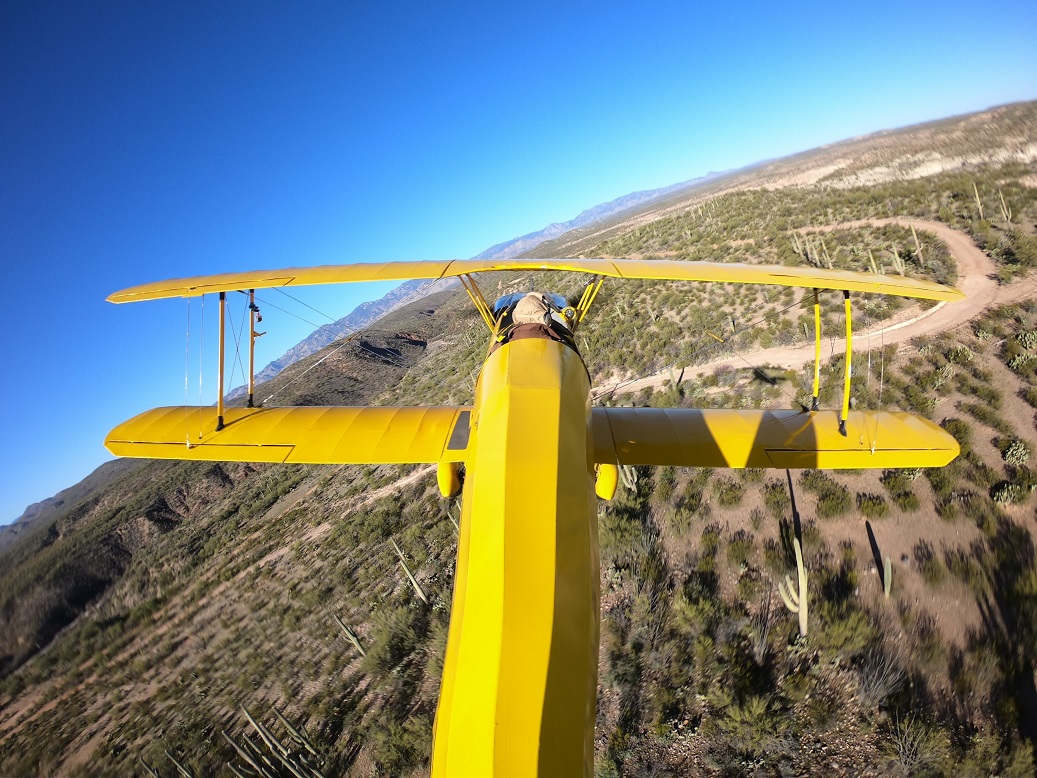 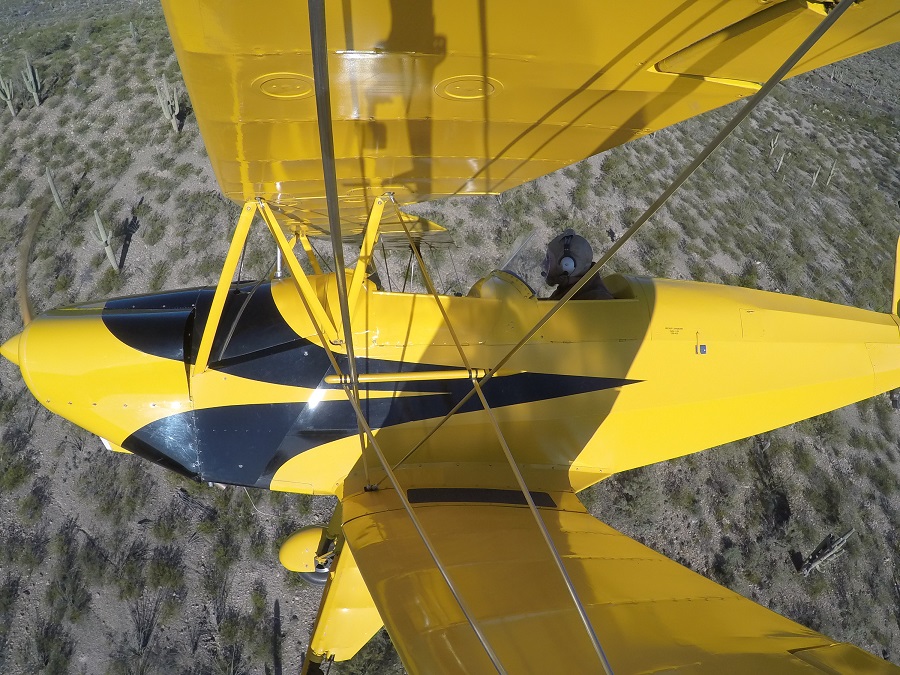 Landed at Benson, Arizona, where the courtesy car is a 1955 Dodge. Unfortunately it currently has a jammed starter, but I didn't think I had time to run into town anyway. 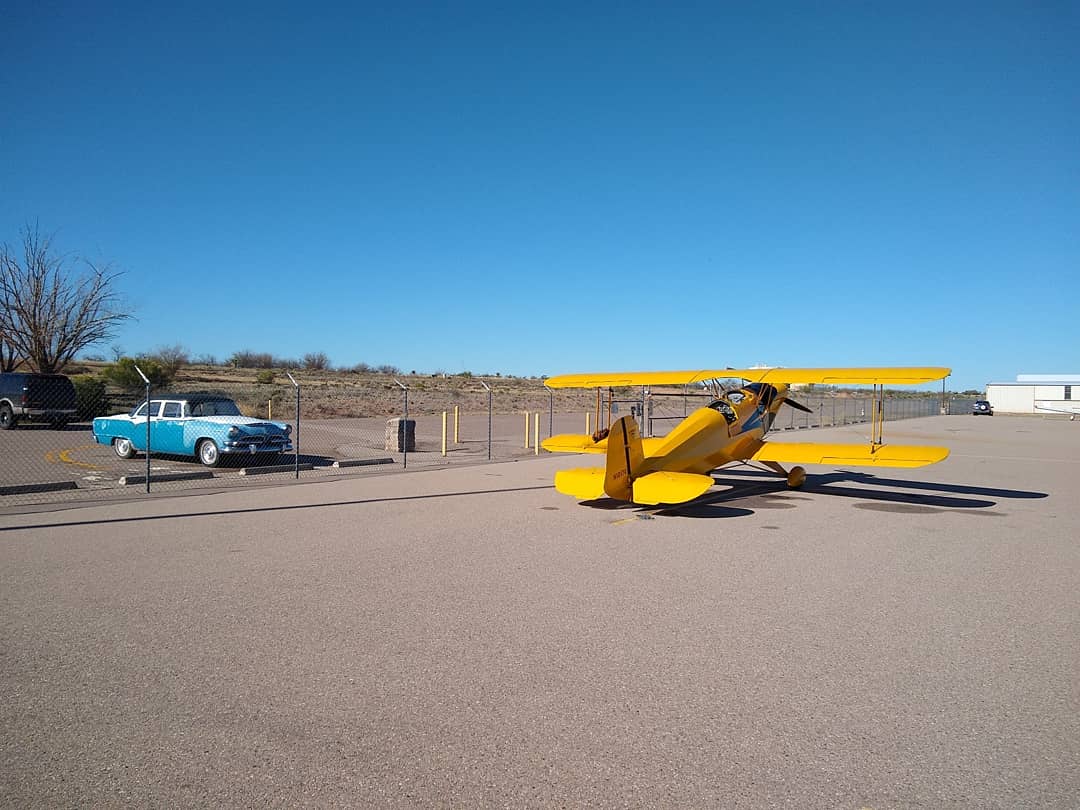 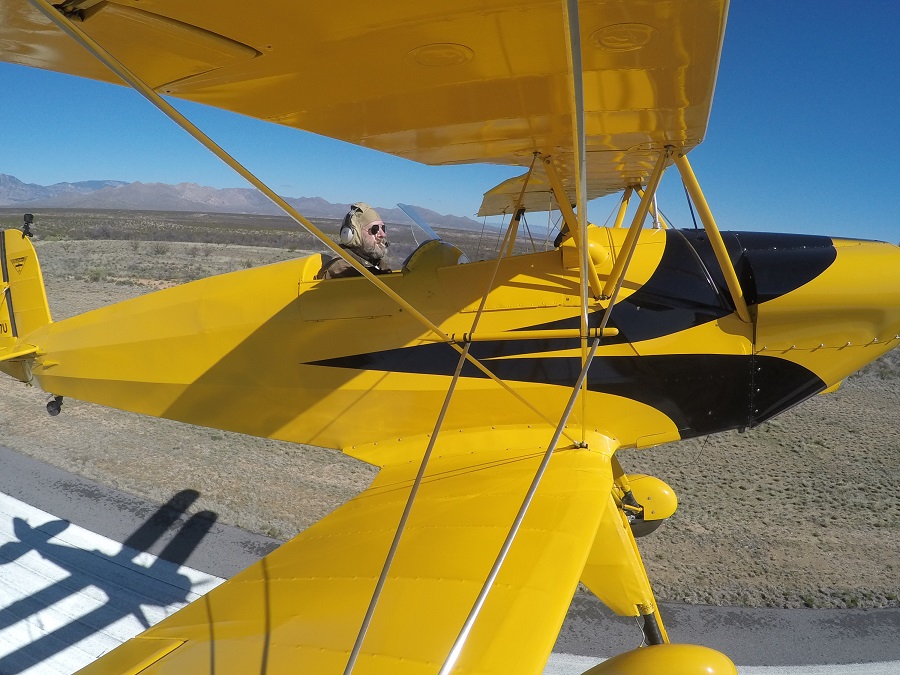 This rocky area just west of Willcox, Arizona is one of my favorite parts of the I-10 route 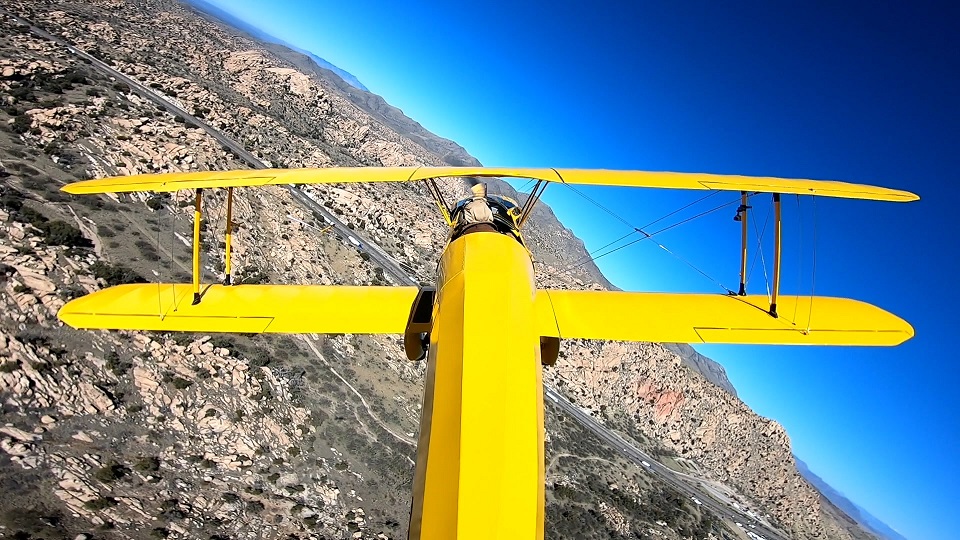 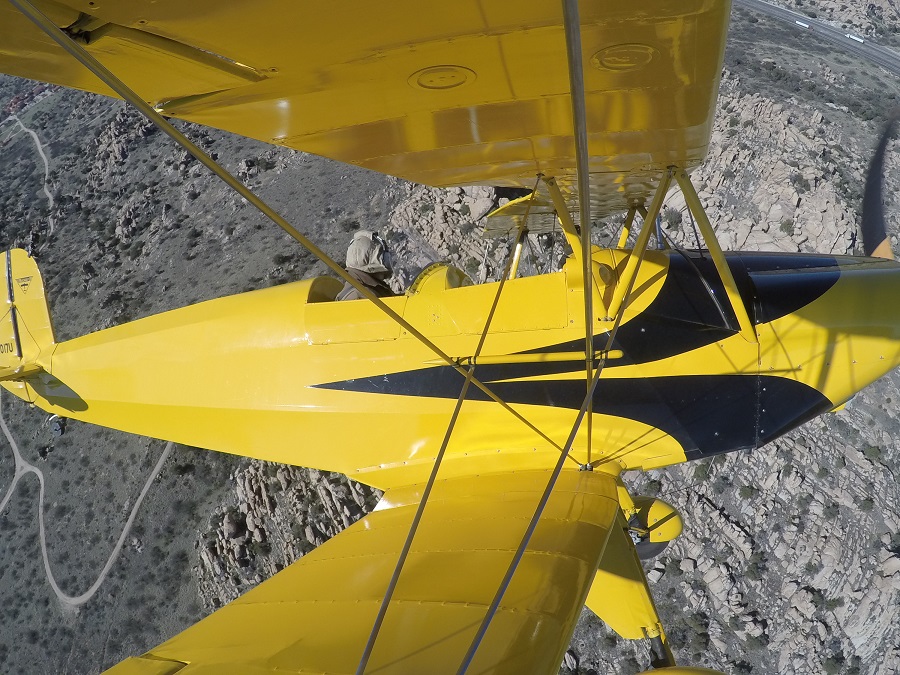 Somewhere in Arizona or New Mexico 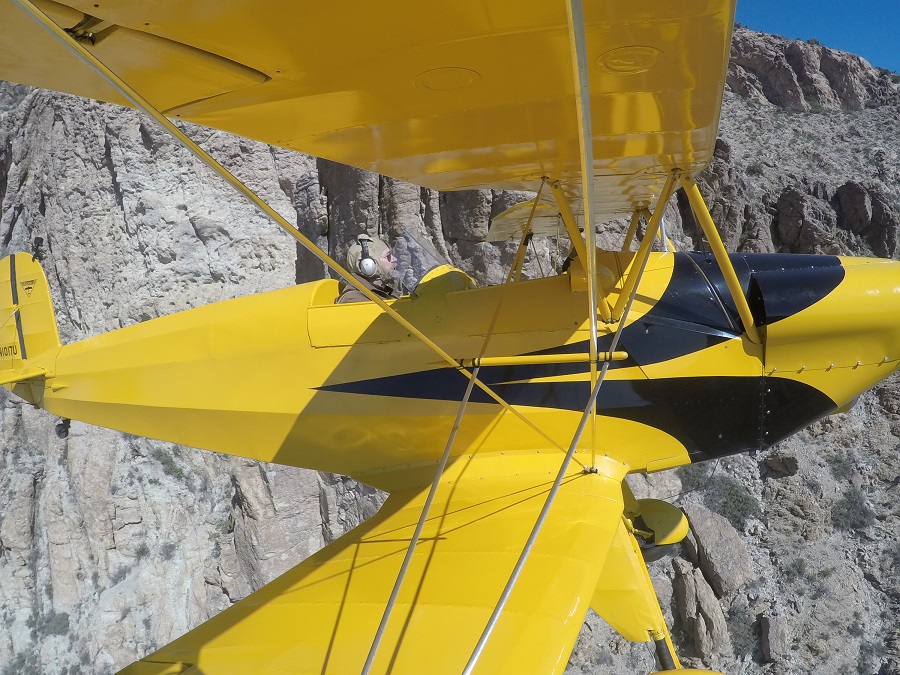 This is Columbus, New Mexico, site of the famous raid by Mexican revolutionary Pancho Villa in 1916. The US military response included aircraft, said to be the first use of US military aircraft in action. Looking WNW, the Mexican border is a couple of miles to the left (south). The "runway" visible between the struts is said to be on the site of the 1916 flying field. 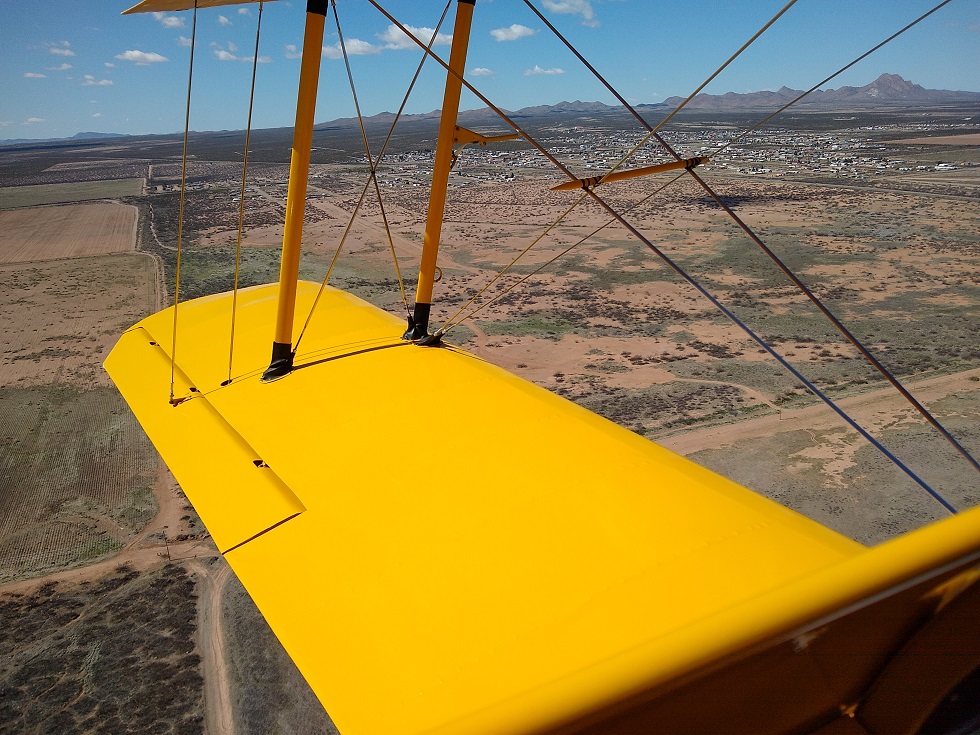 By 1:30 PM on Wednesday I was at Santa Teresa, New Mexico, site of the excellent War Eagles Air Museum. I was disappointed when I landed, thinking that I would have to keep going and wouldn't see the museum, but fortunately I called ahead to my next planned stop, Van Horn, Texas, and found out that it was raining there, and would for the rest of the day. So I went to the museum (neat all black P-38, among many others...), and spent the night in town.

The next morning it was beautiful in Santa Teresa, but again I called Van Horn, and it was foggy there. There isn't much in the way of airfields between El Paso and Van Horn, and I was limited to about 1 1/2 hour legs, so I had to wait. When it finally cleared up in Van Horn I got ready to go, only to find that the battery was dead. Master switch was off so it wasn't that. Two and a half hours later, with a freshly charged battery, I left for Van Horn.

Got a little bored around 50 miles ESE of El Paso. The mountains in the background are in Mexico. The road is Interstate 10 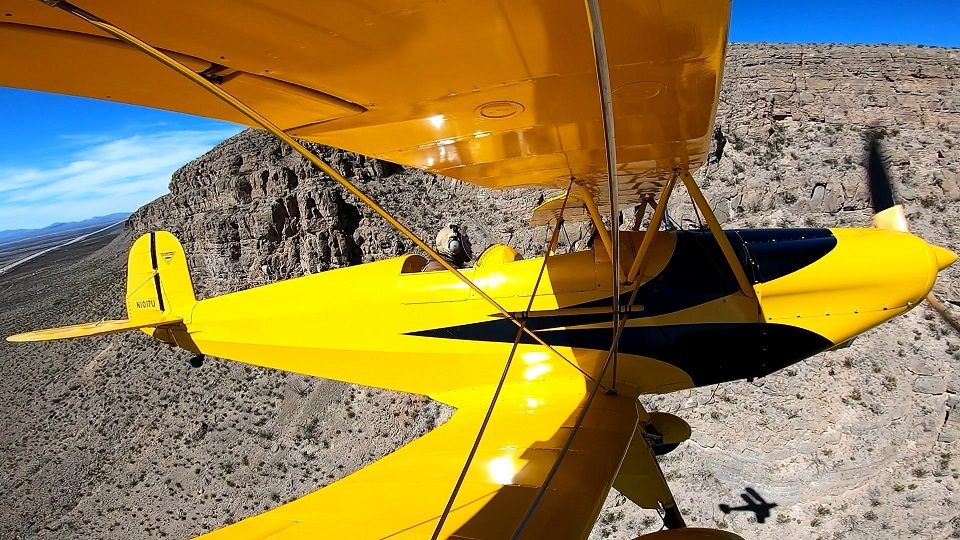 Day 5 covered Central and Eastern Texas, and Central Louisiana and Mississippi. Non-descript is one term for this part of the country. That part of Louisiana and Mississippi is basically flat, and hundreds of square miles of trees, trees, and more trees, as far as you can see. I fly the old fashioned way, with chart and compass, and fortunately the compass in this airplane worked well. 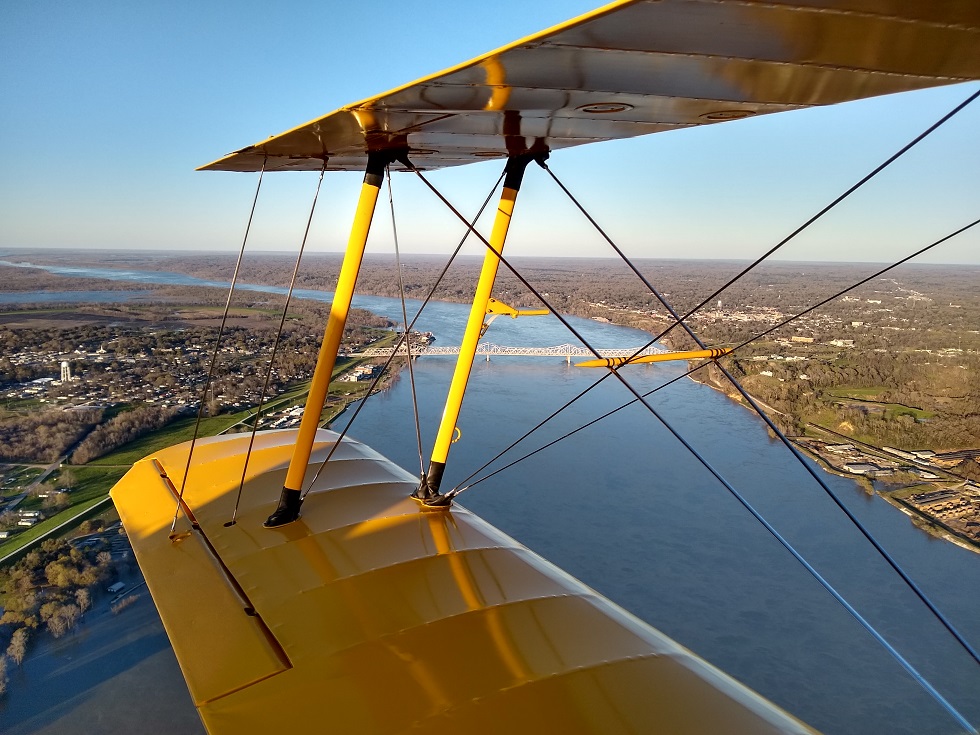 The next day it was calm when I took off, and clear and cold, but after an hour I had only gone 80 miles, so a big headwind had sprung up. I diverted to Hattiesburg, Mississippi, then went to Auburn, Alabama, overflying Tuskegee and the famous airfields there on the way. Stopped at Falcon Field south of Atlanta, and then went on to Elberton, Georgia where I spent the night. The next morning the airplane was covered in frost, so I turned it tail to the rising sun to help melt the frost. Then it wouldn't start, just kept firing and quitting, cold blooded I guess. Finally I ran the battery dead again, so put it back on the charger for an hour. Only 180 miles to go, and couldn't get going. After an hour it started right up, and we were airborne and headed for its new home. A little celebration was in order 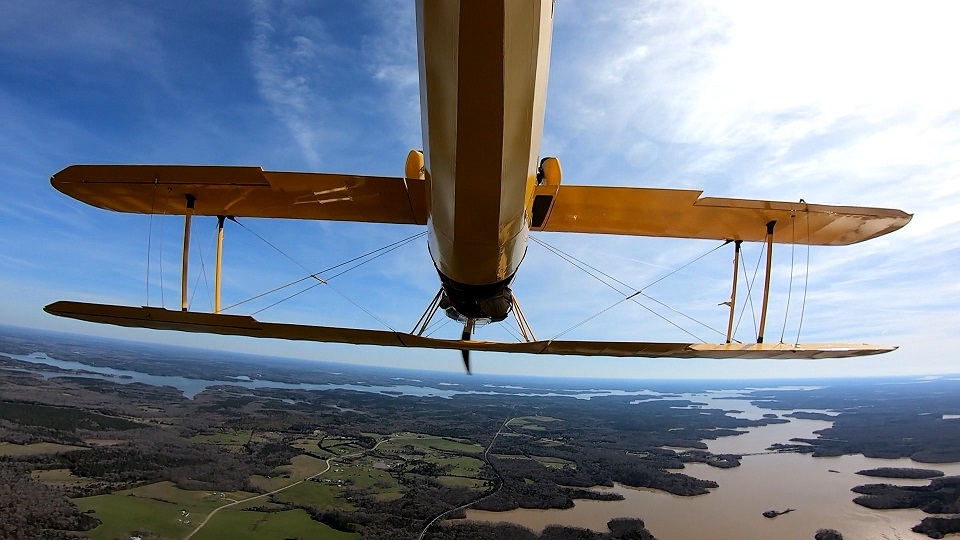 After a stop in Camden it was on to Cheraw, where the new owner was waiting, anxious to have the airplane home.
What a great trip it was, and a fantastic way to see the country. Deadpan comedian Steven Wright has a joke that goes, "I have a map of the United States. It's life sized." I know what he means-

Me too!
Clearly not as much as Baldeagle though.

What a fantastic trip. Thanks for the post.
Dave Hadfield

You sure picked the right direction -- west to east!

I was once asked to fly a DH-82C Tiger Moth from Ottawa to Calgary, in the spring. I utterly refused. I said, "Take it apart, put it on a train, ship it out there -- I'll fly it back, WITH the wind."

They then scrubbed the whole idea.

Dave, oddly enough I had headwinds or crosswinds almost the whole time. I kept thinking, "This is ridiculous, what did I do to deserve this?", but a lot of the time they weren't too bad. The airplane is about a 110-115 mph airplane, and as I said I think I averaged about 100 mph for the whole trip. Wind velocity was a prime concern for planning destinations, and I tried to pick airports with multiple runways whenever possible to give me a good chance of landing into the wind.

As I said I flew over Tuskegee during the trip. It occurred to me while looking down at Moton Field that while the Tuskegee Airmen were down there training in Stearmans, the men who would be their future combat enemies were 4,000 plus miles away training in Buckers like the one I was flying.

Here is Sharpe Field, about 6 miles WNW of the town of Tuskegee. It was the main base of operations for the airmen. Now a privately owned but useable airfield. Somebody told me that a P-51 landed there a few years ago as part of a commemoration.
Looking WNW. 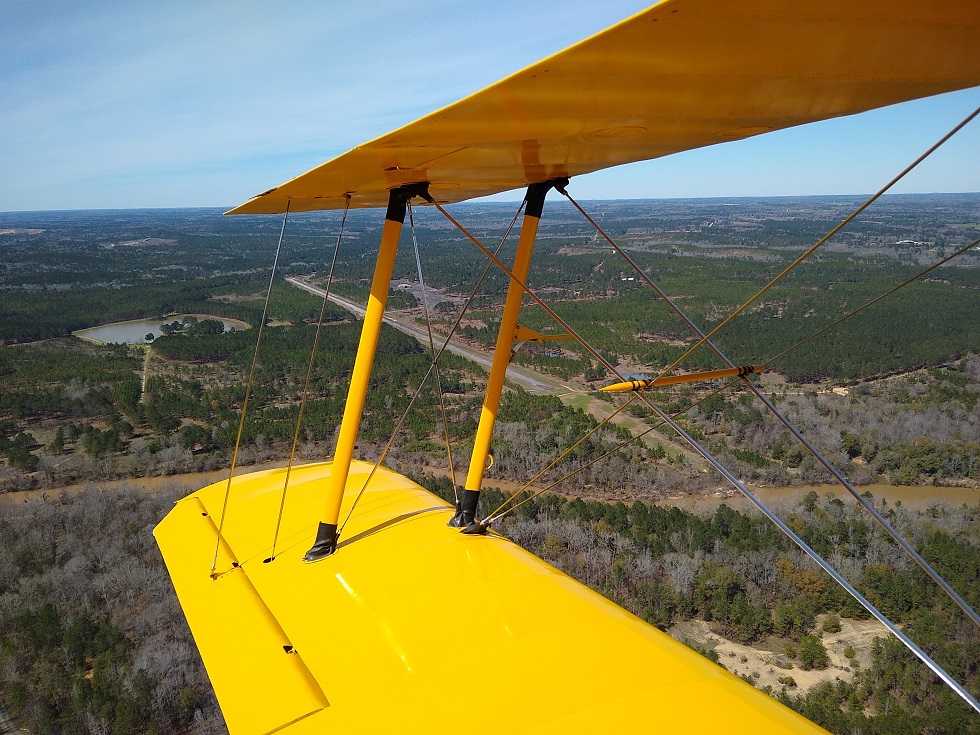 
And here is Moton Field, a couple of miles north of town, and the current GA airport. I would've like to land there but it was a 90 degree crosswind, so kept going to Auburn. Looking south, the town is a few miles in the background. 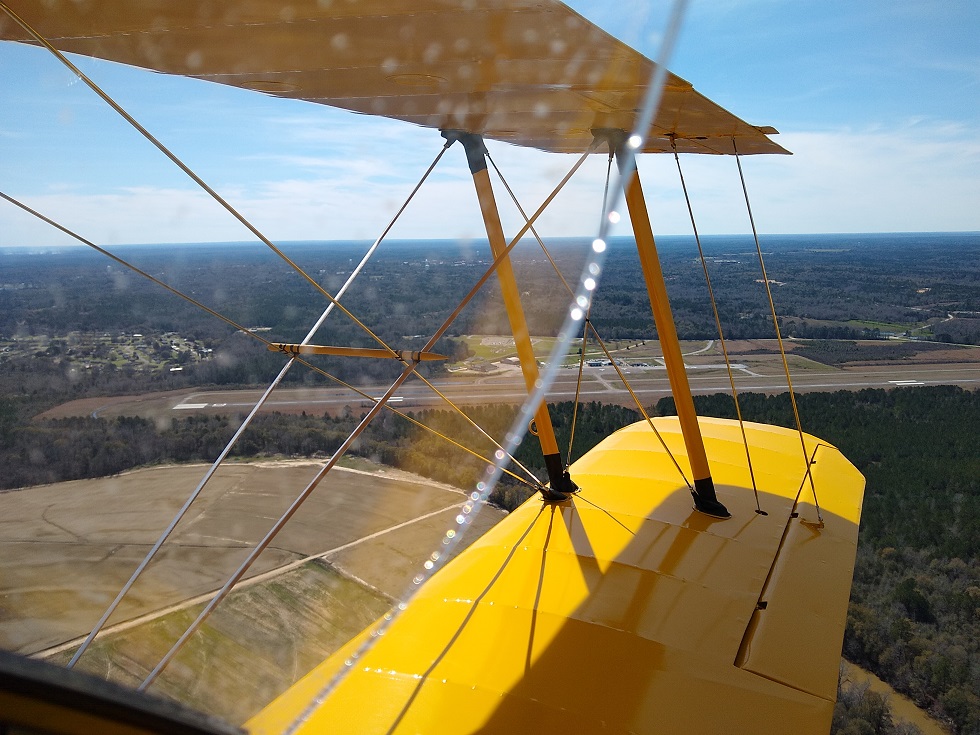 And one last photo, frost on the airplane on the morning of the final day. Brrrrr. 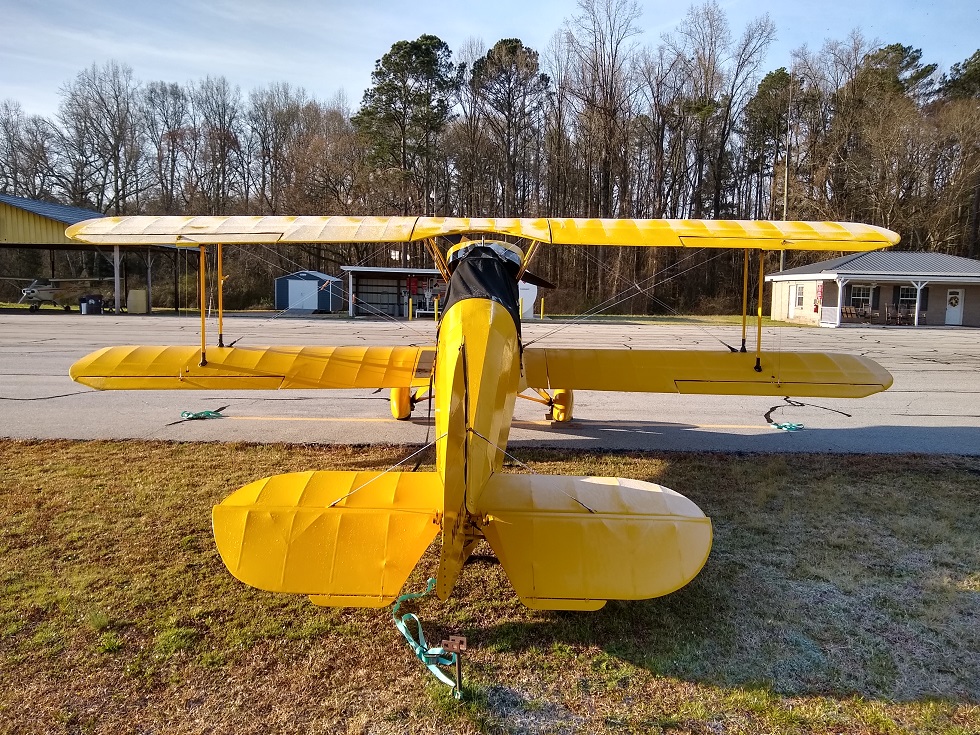 Thanks for sharing BE. What a wonderful trip! How is the cabin heat in this Boo-ker?
marine air

Looks like a fun and interesting trip. Congrats on delivering the airplane professionally and in one piece. Sometimes amateurs damge the plane on the delivery flight.
Post a reply
Switch to full style