Switch to full style
A place where restoration project-type threads can go to avoid falling off the main page in the WIX hangar. Feel free to start threads on Restoration projects and/or warbird maintenance here. Named in memoriam for Gary Austin, a good friend of the site and known as RetroAviation here. He will be sorely missed.
Post a reply
Michel Lemieux

I know spring has been long in the waiting in Canada....but I was just curious.....

and tks for all the hard work.

From their Facebook page.. Pictures courtesy of Don Christopher...

Great job and congratulations to the entire team!

Look forward to your progress updates. With many of the ongoing restorations we always seem to find a way, work thru our challenges and thrive on the numerous small victories. Similar to your project, we don't have deep pockets. However just like the CH2A team we too have very committed volunteers who work year after year until we can see the light at the end of the tunnel. Without the willing hands of volunteers none of this is possible.

Sorry for the lack of updates lately, we're still plugging away over here!

Here's a little one for you guys!

As Peter posted we did remove the most forward nose section from the aircraft, this was done to inspect the condition of the mating surfaces of the two sections, which were in outstanding condition! The sealant used back in the day sure did it's job, we'll just need to replace the many bolts that hold them together. It was also done to make it easier for volunteers to work on the section.

The front section is in quite good condition, we do have a few skins to replace but nothing major. Once that is done, painting can be finished and some of the items from the interior that were removed will start to be put back in before it goes on display.

With the access that we had to the cockpit we also removed the instrument panel and started cleaning up the cockpit area for when it is removed to be worked on. 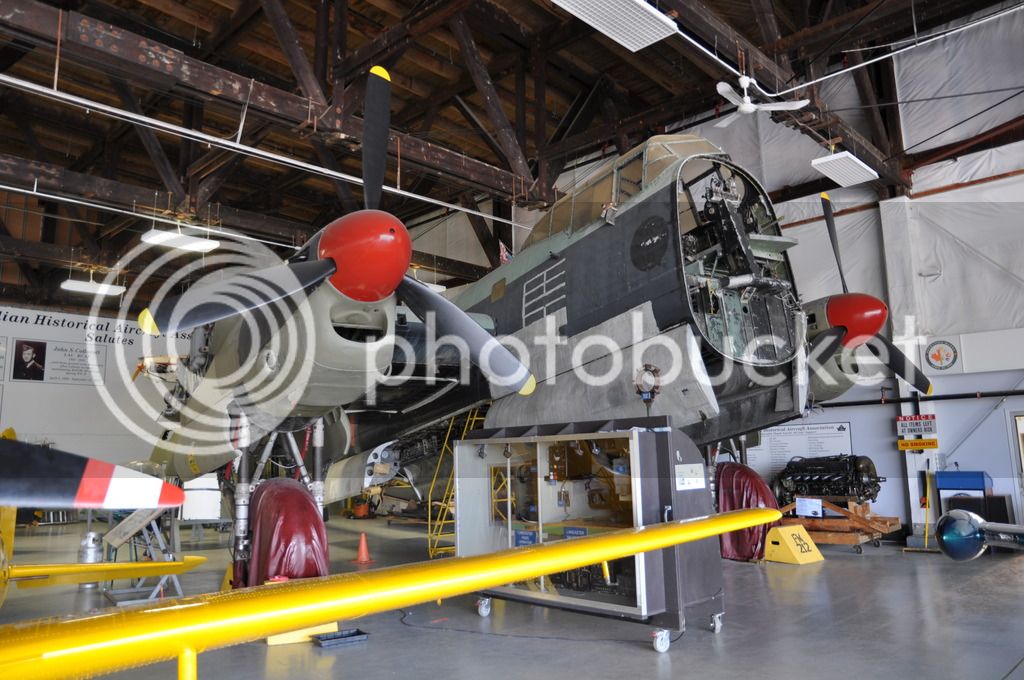 Along with all of that we've been working away at the aft two sections of fuselage. All of the flooring was removed to gain access to the structure underneath. We removed the photo mapping windows from both sides of the fuselage as well as the one that was in the floor. While doing that we found that the underside of the fuselage in that area was made up of two layers of aluminum with wood sandwiched in between. The wood had rotted away so we disassembled the area, removed the wood and made it straight aluminum structure. Most of the new stringers and skins are made we're just waiting for two of the more complex floor formers that we had to have made offsite. 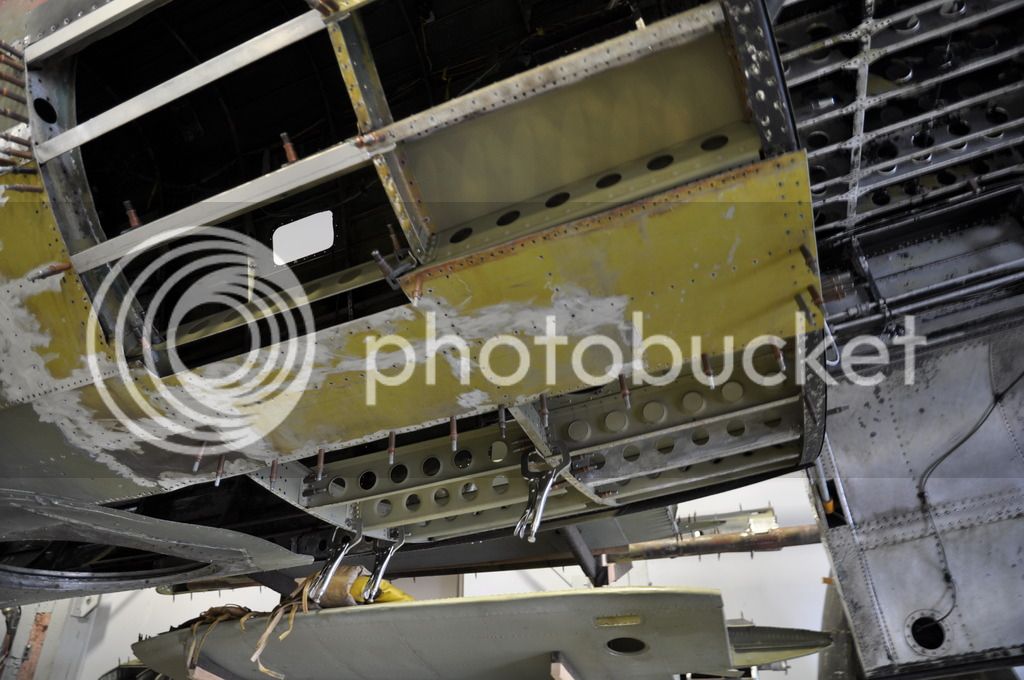 More to come in the coming months!

Great to see! Thanks for the update.
Rhino-9-3

We're still slowing working away here on the project.

The nose section is coming along nicely with some new skins ready for installation. 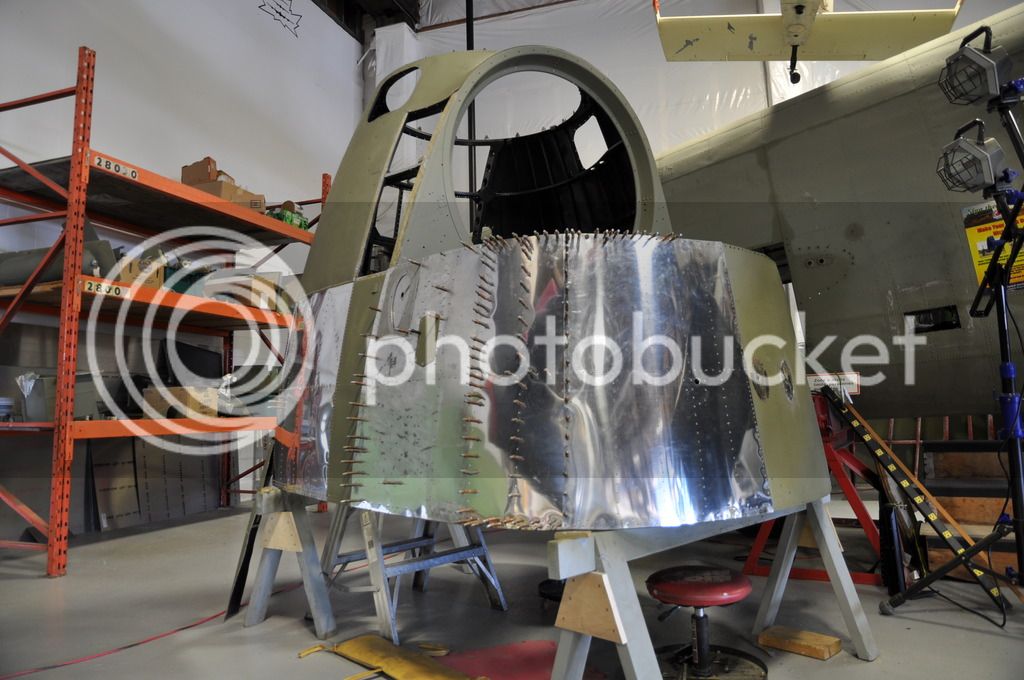 The guys have also been working hard on the aft fuselage. The door has been completely restored and is now reinstalled, we're just waiting on new formers for the bottom of the fuselage before we can start closing up the area that was torn apart there and then the process of reinstalling all of the removed equipment can begin after painting. More pictures to come of all of that work.
Rhino-9-3

A few more pictures of the work being done on the tail section aft of the bomb bay currently.

Update for you guys! It's been a while since the last one, it's getting more difficult to keep them coming with the amount of time that I'm actually in town these days.. but I'll do my best! If you'd like to follow it more closely you can check out our Lancaster FM212 Restoration Facebook page!

Here are a couple photos of the nose section! It's pretty well completed and the guys are in the process of installing all the restored and newly aquired components! It's sure looking sharp!! Just need a nose turret to stick in there now!

Once all the work is done it will be left off the plane and used for display until reassembly of the fuselage later on. 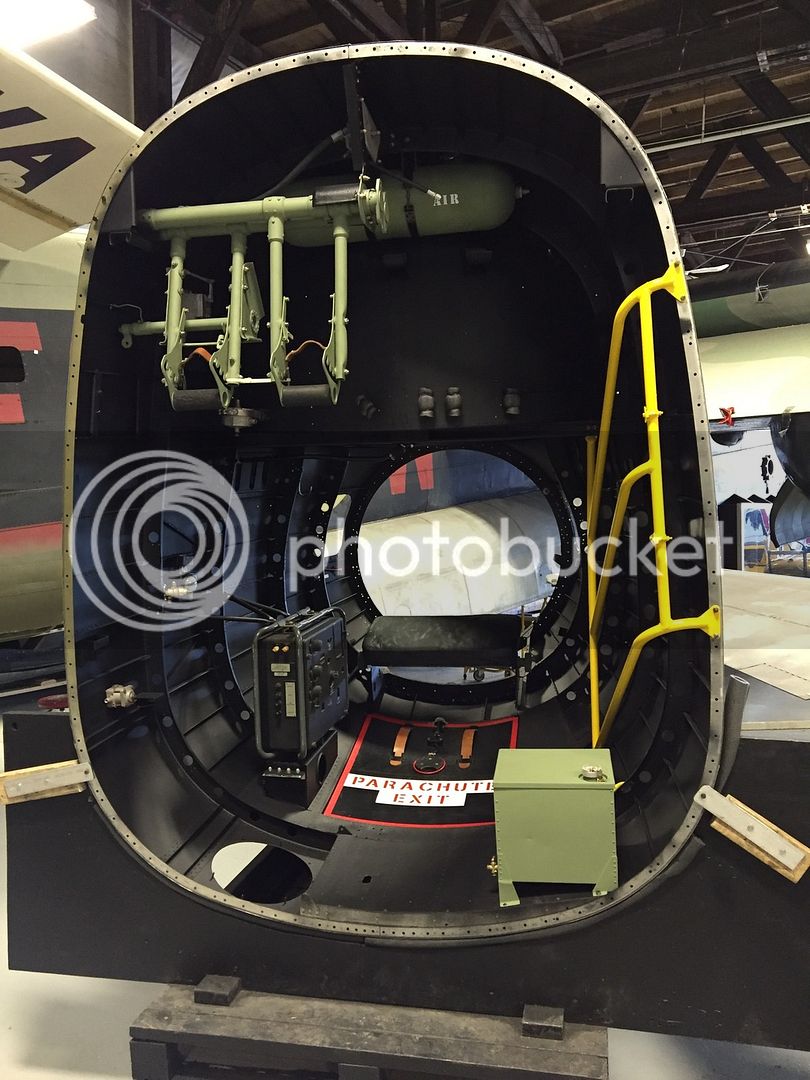 Along with that, the guys have been hard at work at the aft fuselage repairs! The last intercostal was made last week and the guys can begin to drill out the many holes required to rivet the outer skins and floor panels into place!

After both of these sections are completed we'll be looking at where to move next! More to come!
Fouga23

Thanks for the update

Thanks for the update.

I've gotta get down and see you folks this summer!

Sorry for the lack of updates on here again, we're still alive over here and chugging along! Some great updates on the Facebook page, especially today with the donation of an almost completely restored FN-5 nose turret from Mike Sattler and the Canadian Museum of Flight in Langley BC! Facebook link: https://www.facebook.com/groups/75034966975/?fref=nf

There has been a lot of progress on the project over the last few months since the last update that was posted on this page! If there is enough interest on this thread, especially for those who don't have Facebook, one of these days I can compile most of the photos and do a large update on the project here if anyone would like! Let me know!

I'm a big fan of your updates Ryan, both on this and the Mosquito project.
I definitely appreciate the effort.
Thanks.

I just had a quick peek at the FB link and that turret is a beautiful score! Congrats to the team and thanks to the donor.
Andy
Rhino-9-3

Alright, here's the big update for you guys!

We'll start with the aft belly/floor repair which is 99% complete at this point, just one more strip to rivet on near the bomb bay which the guys are working on making currently. The guys sure did some great work here!

Progress pics, up to about a week ago:

Next up is the wooden doors/tail gunner ramp for the aft tail. Don did an absolutely amazing job on the doors and frame! 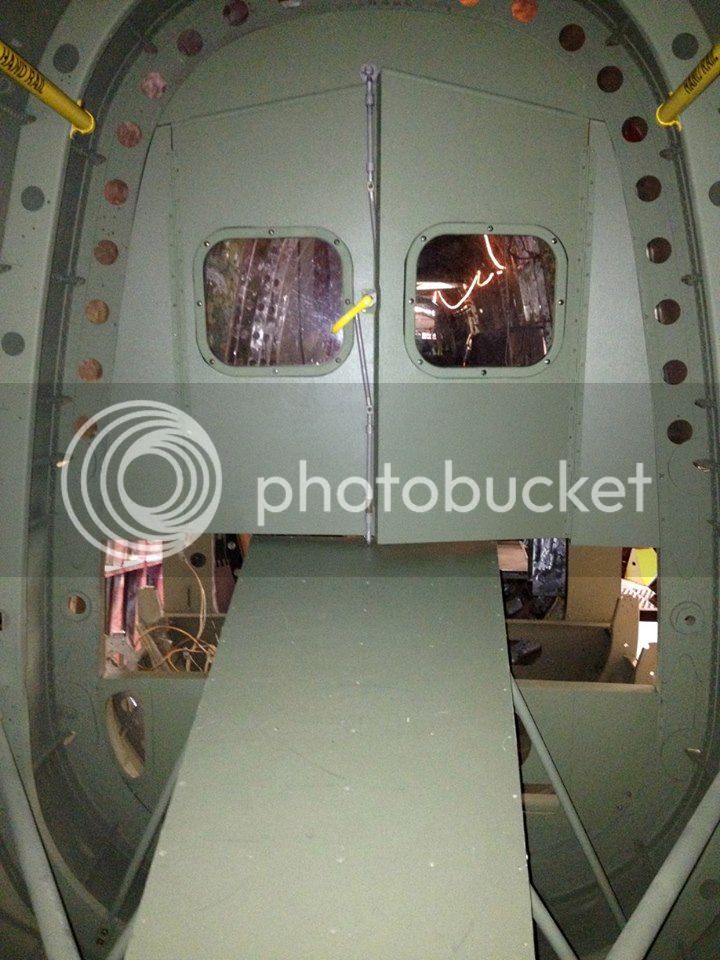 I'll have to try and get some more photos of the nose section but here are a few for now, the guys have been working on cleaning up all of the equipment and installing it into the completed nose section.

And to go with the competed nose section we now have a partial FN-5 nose turret donated to us by the Bomber Command Museum of Canada in Nanton, Alberta and most recently, another almost complete FN-5 turret from the Canadian Museum of Flight in Langley, BC. With a bit of work and new lexan we'll have one mounted on the nose section in the near future!

Thanks again guys for the donations! 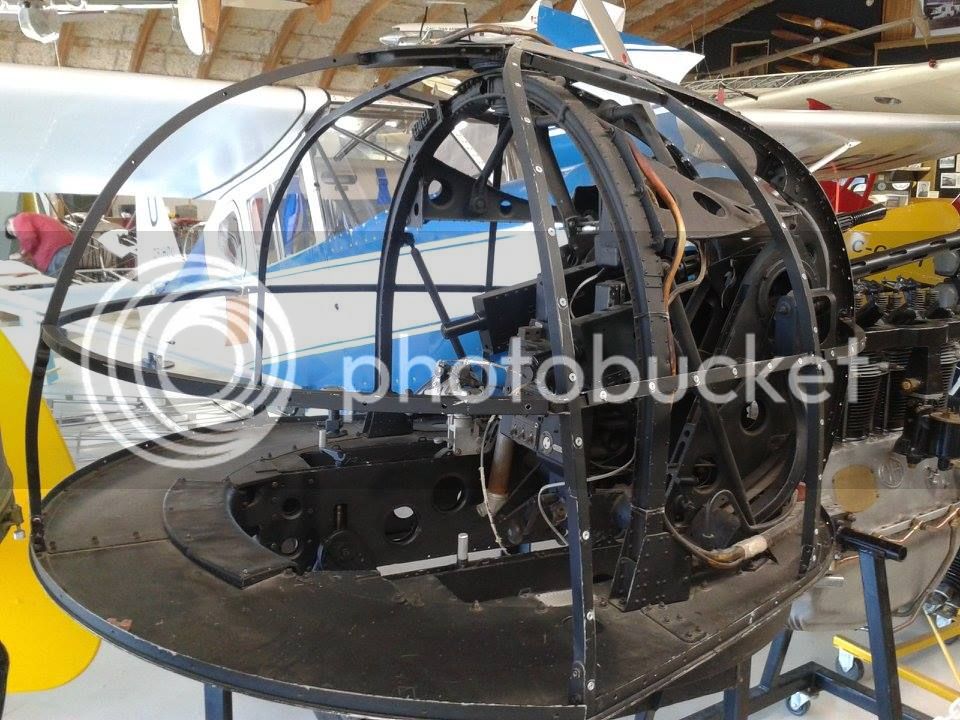 Lastly is where we're at now with the project. With the belly repair and nose section pretty much completed work has begun on dismantling the center section area and preping for the landing gear removal and eventually the separation of the center section so we can begin the huge task of replacing the spar webbing and floor that was torched out to mount 212 in the park.

Flap removal before removal of the trailing edge of the wing.

Engines de-cowled, they'll both be coming of the plane in November.

And lastly the view of the RH side right now with gear doors, valances, flap, etc. removed.