Switch to full style
A place where restoration project-type threads can go to avoid falling off the main page in the WIX hangar. Feel free to start threads on Restoration projects and/or warbird maintenance here. Named in memoriam for Gary Austin, a good friend of the site and known as RetroAviation here. He will be sorely missed.
Post a reply
Rhino-9-3

A few more photos of the progress on 212 as of this week:

We received the nose turret from the Canadian Museum of Flight last week. It sure looks great on the nose section! We're just waiting for the new perspex to arrive and then it will be complete.

Along with that, the RH inboard wing section training edge was removed after quite a bit of work. The section is now in our shop and being prepped for the repairs it requires.

After a few long months away from Windsor I finally had the chance to get back down and help out with some work on FM212 again this past week!

First up was removing the #2 and #3 engine propellers and then breaking them down for easier storage for the time being. This was the first time in probably 50 years the #2 prop had come off:

Next was the removal of #2 and #3 engines, again this was the first time removing #2 from the aircraft:

Lastly, yesterday we managed to remove the left inboard trailing edge off of the aircraft, after a lot of scrapping to remove the sealant on the seams and a bit of force it finally came off!

Next up will be placing the jack stands under the inboard section of the wings so we can start the removal of the landing gear. Once our fuselage cradles are finished we'll then be hoisting the aircraft off of the jacks and placing it into the cradles. Then we can go ahead with separating the cockpit section and two tail sections from the center section to make it easier for the crew to work on each section individually. Plans are to at least have the gear removed by the end of May. Meanwhile the guys are working hard on restoring the right trailing edge that was removed and inboard flap sections, as well as finishing off the nose section which is about 95% complete at this time, just a few minor details being worked on still (photos to come). Along with the nose section, we've also been working on the plexi for the nose turret which has had some restoration work done on it as well (can follow along with that on the Facebook group for the restoration if you like).

More to come throughout the year, it's going to be a good one for the project!

Awesome. Thanks for the update

Finally able to pass some more updates on to you guys!

We'll start with the nose turret, as of last week it has officially been completed

It will be mounted on the nose section soon!

Along with that we recently worked out an agreement with the Aircraft Maintenance/Structures Program at St Clair College here in Windsor. Over the course of the summer (until September) 18 students will be working with us on the project twice a week. They started with paint stripping of the wings (which we didn't think we would touch for a few more years). Slowly they are learning the practices of aircraft structures work with our team, as they gain the skills required they'll be able to take on bigger projects here at the CH2A.

They've begun with replacing skins on the inboard flap sections.

The inboard trailing edge sections are also nearing completion a lot faster than we had planned!

After Airshow YQG we'll be looking at taking the aircraft off of its landing gear and separating the fuselage sections!

On that note, check out Airshow YQG May 27/28 here in Windsor, Ontario! www.airshowyqg.com We'll have displays from current military, vintage military and civilian aircraft, and you'll be able to check out FM212 and Mosquito KB161 up close!

Well the fuselage is down and the center section and nose section are fitted to their stands ready for separation! 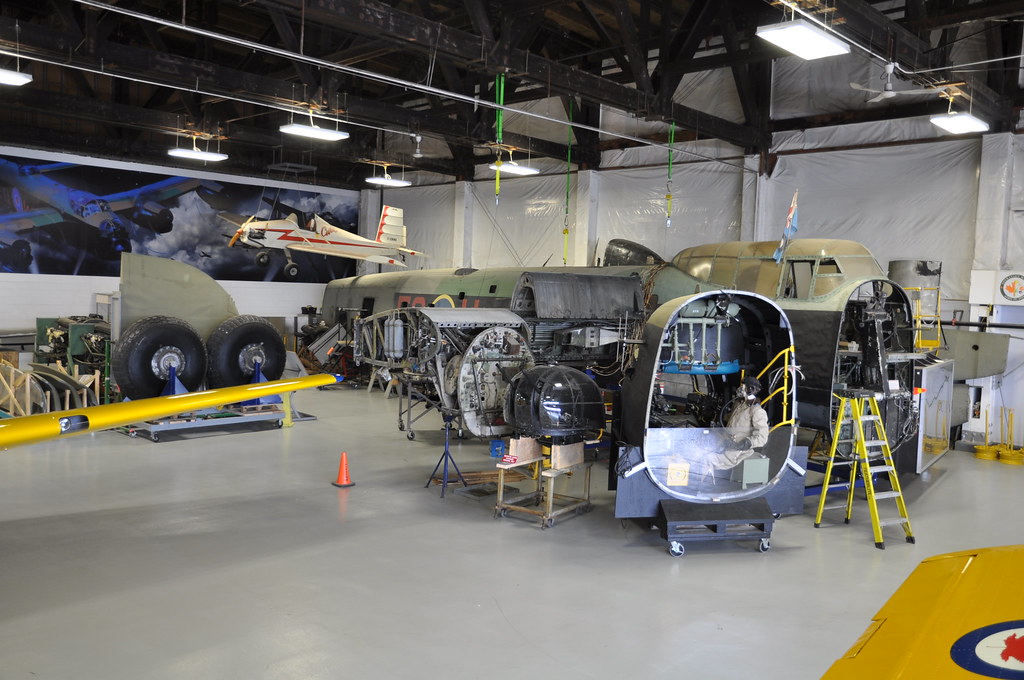 I'll post some more photos of the progress soon, but things are moving along nicely with both the inboard wing trailing edge sections completed, the inboard flaps getting new skins, the inboard fuel cell panels being cleaned up, landing gear parts getting inspected, cleaned and painted and one of the main wings about to go into a jig to begin work on it! Along with all of that the separation of the cockpit section should occur in the next couple of weeks!

We also acquired another Martin 250 mid-upper turret which the guys have started to strip down and clean up. This one will be the one we install on the aircraft as we'd like to keep the other we have as an interactive display for visitors. 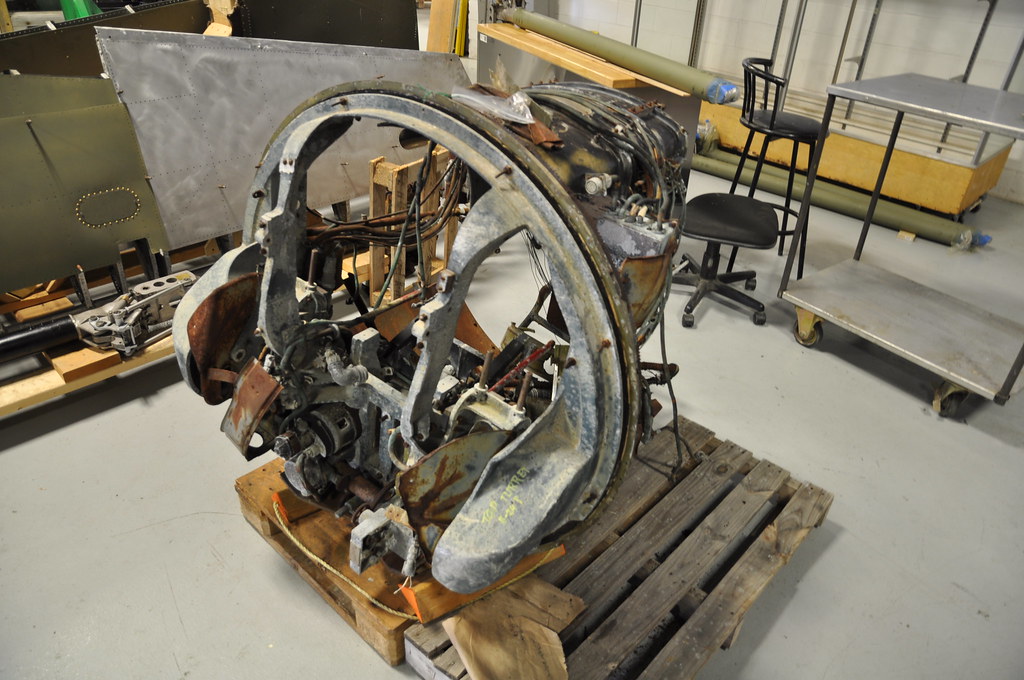 As everyone knows Photobucket really screwed everyone over with 3rd party hosting, so I'll be looking at either uploading all of the progress pics to an album on Flickr or onto the CH2A website in the near future.
Rhino-9-3

Just got back from another visit to Windsor and thought I would post some more photos for you guys!

First we have the RH main wing section. The St Clair College students were put to work on this one slowly removing and making new skins. There was a quite large birds nest in this one when they opened it up and some damage to the ribs in the area where the wing hoist point is. Lots of work to go but it's a good start! 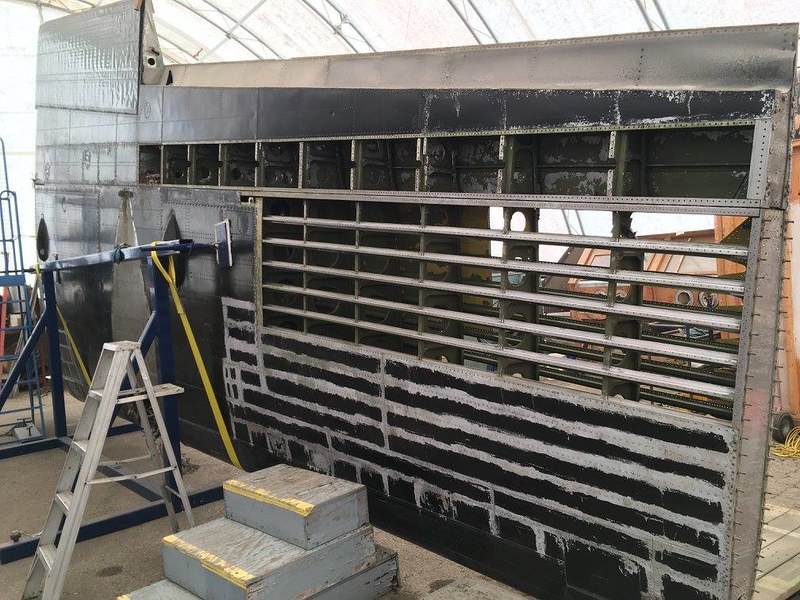 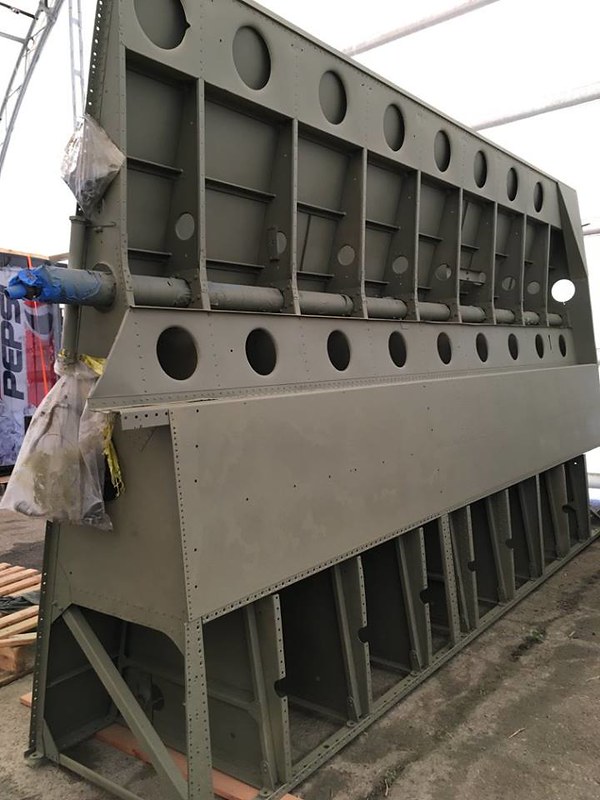 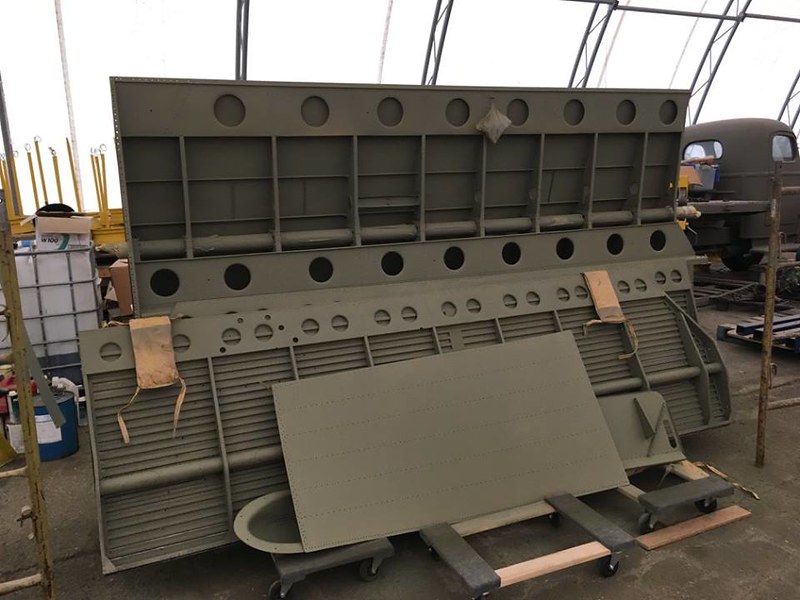 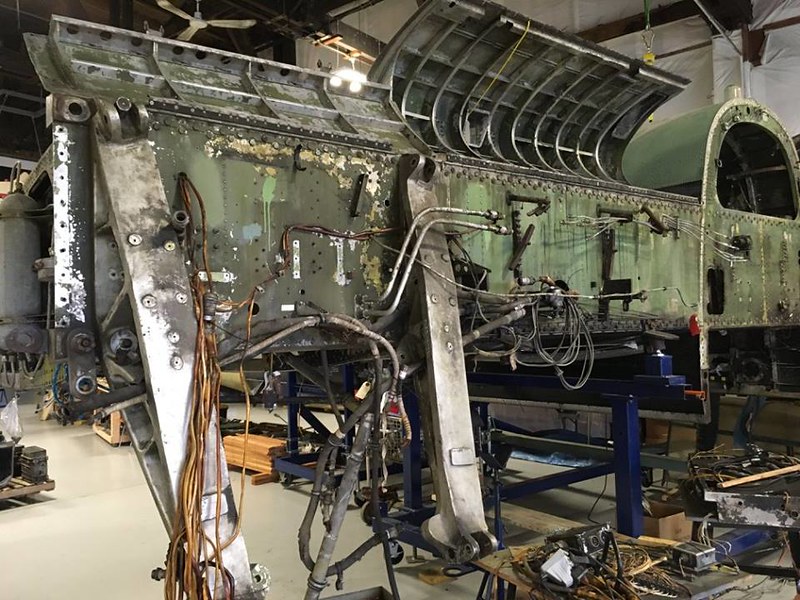 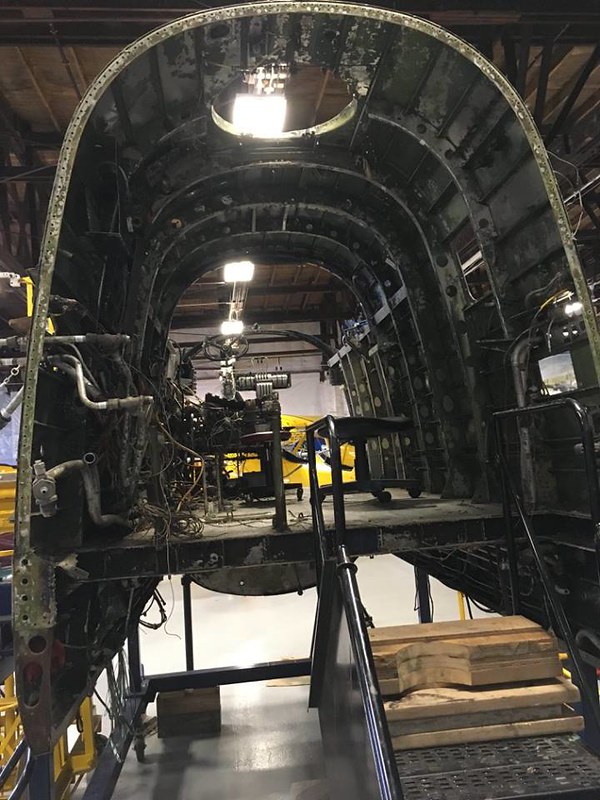 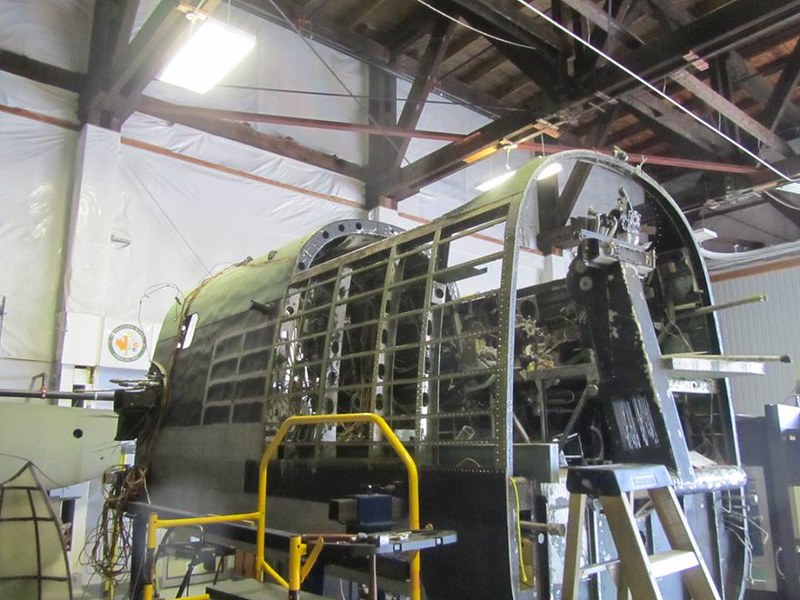 Here is the RH inboard firewall after being cleaned up and painted. The plan is to finish each firewall section and re-install as much as we can on them before they have to be installed on the aircraft down the road. 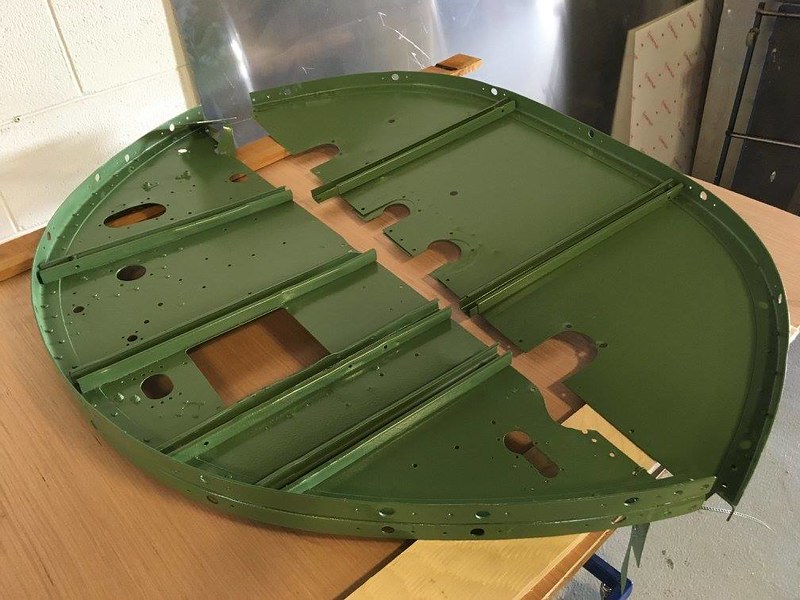 This last one is the instrument panel so far. A couple of the guys have slowly been working away on restoring the various cockpit components that we removed for the guys to get access to all of the structure. 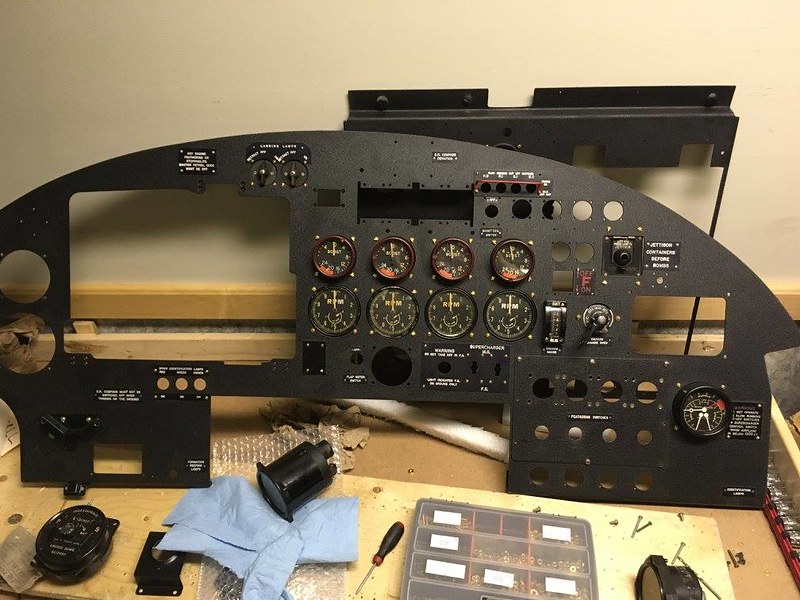 I'll be back down in December, so expect another update sometime around there.

Great update Ryan! Pretty sure that large nest was a leftover from the hawk that used to nest in the wing when she was on the post.... thing was a buggar to deal with trying to work on the lanc and being "strafed" by it

Its a shame that some of the craftsmanship of both instrument making and with cases and other things is starting to disappear. Vintage restoration of anything is harder to find these days.
Post a reply
Switch to full style