Switch to full style
Since people seem to think that the off-topic section is for political discussion, something that is frowned upon, I have temporarily closed the section. ANY political discussions in any other forum will be deleted and the user suspended. I have had it with the politically motivated comments.
Post a reply
greatgonzo

I was just joking, but still very nice to meet You.

I will probably sound too blunt..but....

I seriously doubt the vast majority of the kids in the photo have the slightest idea what a NAZI salute or even a NAZI actually is. Today, a NAZI is what they call somebody with whom they disagree with on Facebook. Schools in the US have placed little to no focus on WW2 in decades. I graduated in 1979, and read every book the library had...most had not been checked out by anyone else since the 50's already. As a library assistant, I oversaw removing 90% of the books from the stacks, and knew they took any book on the subject off the future purchase list.

For the last at least 25 years, the only "History" being taught to any degree is the Harold Zinn version. It is entirely focused on how bad white people are, and how they cheated, killed and took advantage of minorities to get everything they ever had. Today's youth overall have no idea about ANY history outside of "The Civil Rights Movement". It's not their fault, and only a few who are confronted with more details will even listen. Most automatically try and turn everything into some race argument. I had the great misfortune of taking an "American History- 1700's-1850" class at a college about 10 years ago. The hispanic teacher openly bad mouthed white people the entire course and blamed them for all manner of social issues. He was not pleased when I would corner him with facts and demand a logical answer. the other white guy in class was so angry he quit the class. OTOH- the two young black women I had as lab partners thought Spain was an island. Europe was close to Spain, and than therefore all Europeans were Spanish (not joking).

Finally, EVERY gesture seems to be getting appropriated as some sort of racist gesture. Of course gang bangers can "Throw signs" all day and it isn't. The first thing I saw in the photo was the clown playing the Circle Game. I saw that the students waved as the photographer told them to...and immediately thought "Even their parents are probably too young to have a clue what a NAZI salute even looks like".

For all of the drama and chaos that has been assigned to the photo- the most clueless ones in the entire argument are the ones doing it. My only sense of hope comes form one of my early 20's friends who is a HUGE history buff and watching his intelligent responses to hordes of people being stupid on Facebook. Sadly, out of the hundreds of contacts I know, he is the single person who knows history at all at his age. I also happen to live 3 miles from the largest population of college students in the country. I would bet you'ed be hard pressed to find 10 on campus who even knew who Himmler was...
myteaquinn 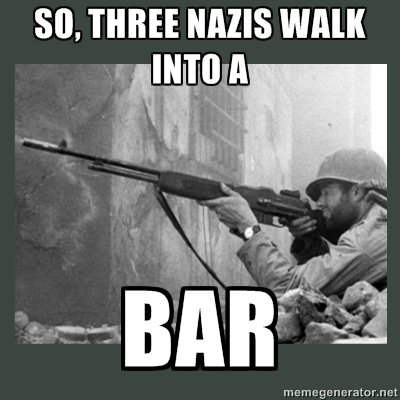 Ken Smith, on the Facebook Air Racing Historical Society page was threatened with a ban from Facebook. He post an older photo of a Reno F1 pilot with his arm straight out of the cockpit...which looks like the throws of a fist pumping action after his win...but no, somebody interpreted that as a Nazi salute. Facebook acted and threatened him with the ban. It was under appeal as of my last look at Facebook on Saturday.

13 years ago we did a trip to Germany and could barely find a tour guide willing to show us WWII historic sites. Fast forward to 2015...there are markers with photographs and text in 3 languages at key sites. The Germans have come a long way from the wall falling in 89, to the mid 2000's, to now openly acknowledging the history. In 2015 I got a Starbucks next to the Brandenburg Gate across the street from the Hotel Adlon...which is a stones throw from the site of the Reich Chancellery...it was surreal to think at one point this was the most terrifying place on the planet. Having been to several concentration camps and death camps and given the close proximity of towns, it his hard for me to fathom or think the majority of German people didn't know what was going on...particularly officers. At some point you have to leave the responsibility on the graves of those that committed the crimes. It is our responsibility to teach the history, honor the sacrifice and never forget.

If you look at the Pacific side of the war, atrocities were committed on a large scale as well...but, very few ever balk at the rising sun...the Tora act has been going on for years and the recent A6M builds have garnered almost no attention from the Rising Sun...at least here in the U.S..

Hakenkreuz was a specific symbol of NSDAP and is treated as symbol of its horrid ideology. Balkenkreuz is just German Air Forces insignia and is not forbidden anywhere. The same goes for Japanese roundel and AFAIK there was no symbol comparable with swastika. Another thing is not that many people of western world were confronted with Japanese terror. It just went by not being really recognised. Probably it works like that anywhere. My friend visited some T-shirt shop in China and was quite surprised to find a brand with a logo looking exactly like nazi eagle worn on uniforms, hats, and flag poles of the time. Chinese companions asked about it barely knew what he was talking about, but they were absolutely aware of the terrible times of Japanese occupation. I hear the picture of friendly uncle Stalin, who maybe have been doing some not nice things, but still help to conquer ugly Hitler lingers on in the west. Sickle and Hammer symbol is forbidden in Poland just like swastika. Stalin murdered millions. He performed ethnic holocaust in want of extermination people of Polish and Ukrainian nationality long before Hitler started to dream of such ideas.
I153_Chaika

As someone who lost family to the Third Reich and who hates Nazism, I don't think there's anything bad in owning WW2 era German militaria, or restoring a German plane, or doing German models or reenacting. Hell, I have built a couple Messerschmitts myself, and would love to take part in the restoration of a Stuka or Heinkel 111 bomber if one was to be dug up from an Eastern European marsh.

I think that the reprehensible thing is "Nazi memorabilia" itself: not the planes, the steel helmets or the rifles, but things directly linked to the Nazi state, system and ideology. A black SS uniform, for example, or the diaries of a death camp guard, or something belonging to a NSDAP member. I know that some people will contest that, but I think that Waffen-SS stuff should be given to museums but not used for profit as well, since they were the armed branch of the Nazi party. Wehrmacht, Luftwaffe etc stuff isn't problematic.

But what bothers me is that said politically related Nazi memorabilia IS what sells for the highest prices. If we are to believe this article, Hitler's writing desk was sold for $422000. Four hundred and twenty-two thousand dollars. That kind of money will buy you a bona fide villa in Torrevieja, Costa Blanca, Spain. Or an actual, flying condition MiG-21 with import, registration, training and fuel costs covered... That thing should be in a museum, not sold for profit.
greatgonzo

I ain't going to discuss what is or is not problematic. Still Wehrmacht and Luftwaffe were an armed branches of nazi party too. Formalities are bunkum here.
Timothynen

A Nazi artifact vs a Nazi ideology

What if Nazi Germany fights Imperial Japan during World War 2, German have a superior land force while Japan has a superior navy. how will it turn out?
p51

Okay, here are a few points that nobody seems to get:
If someone wants authentic markings on their German WW2 plane, a swastika needs to go onto the tail, just as the markings should all be in German. If you don't want it that way, then fine. The owner gets to make the decision, period. I won't fault an owner who wants correct markings, no matter what they say. They'll have to explain themselves eventually to someone, but that's exactly what the GIs fought for, the right to do just that, especially if it's just done to re-create the correct look said plane had during WW2.
The US government interred people from Axis countries (and not just Japanese) during the war, something that was declared illegal during the war by the government. So, would by some of the 'logic' being bandied around here, that would mean anything in AAF or Navy markings is offensive as it supports a racist government (which nobody can argue the US government wasn't back then in the 40s), right?
What about German kill markings? Is that wrong to put those on a P-51?
The Japanese did unspeakable stuff to their enemies (including Allied citizens and servicemembers) during WW2, but they still have the same flag today. How is that okay? So many people seem to consider evil from WW2 to start and end with the Germans. I think the reason for that is even to this day, Americans could more relate to the Europeans/Russians the Germans killed during the war, but not so much the Asians their allies killed (many of which in ways even some Nazis would have winced at) on the other side of the planet. I fully think this is why the ETO has always been considered the more 'interesting' aspect of WW2...
Post a reply
Switch to full style